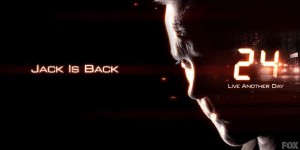 It was always just a matter of time before Fox’s hottest show returned.  I know everyone is old now, and it is all stuff we have seen before, but it is 24.  This is the show that really started the modern era of event TV, so it was just a matter of time until Fox threw a bunch of money at everyone, and started to rake in the viewers.

President Heller (William Devane) is in London to secure air-base rights for his anti-terrorism drone program, but most of the people in London hate the drones, so they are putting pressure on parliament to not renew the treaty.  Meanwhile the London office of CTU is tracking down a target that might threaten the President, and of course that target is Jack Bauer (Kiefer Sutherland).  He is not a threat to the President, but he believes there is one, so he is trying to work his magic one more time.

Like I said this isn’t the most original plot ever.  On 24 the President’s life is always at stake, but it is still interesting, and the drones at least make it feel current.  I do hope they can change things up a bit as the series goes on.

The actors all know what they are doing.  They have been playing their parts for so long that they just are their characters.  There were rumors awhile ago that they were going to reboot the series, but without Kiefer Sutherland and Mary Lynn Rajskub (Chloe) there is no 24.

While 24 is no longer new and exciting, but it is still interesting and entertaining, and it is just good to see the gang back on TV for one more ride.  If you have never seen 24 before, you can probably catch up, but I would still start with the first couple of seasons since they are much more intense.