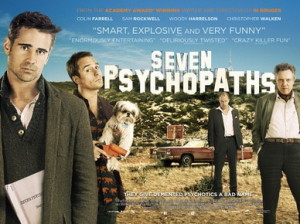 Seven Psychopaths is a 2012 film written and directed by Martin McDonagh (In Bruges).  Much like In Bruges,  Seven Psychopaths is about violent men, but this movie is much more self aware and strange, and even now I am not sure whether I loved it or hated it, but I do know it made me think.

The film fallows Marty Faranan (Colin Farrell), who is trying to write a new screen play for a movie called Seven Psychopaths.  He is having writers block, so his friend Billy Bickle (Sam Rockwell) is trying to help him by pointing to real life killers through either the news or an add in the news paper asking the psychopaths to come to him.  Billy has a side business with Hans Kieslowski (Christopher Walken) where he steals dogs and Hans plays the good old man that found the dog for reward money.  Business is good until they steal a dog from Charlie Costello (Woody Harrelson) a local mob boss and psychopath, and now all their lives are in danger.

This is one of the more bizarre movies I have seen in awhile.  It feels like you are watching the movie being written right in front of you, and Martin McDonagh has a lot to say.  He knows you are watching the movie for a funny violent buddy comedy, and he does give that to you partially, but he also uses Marty to rag on the current state of film scripts, with their dumb over top action sequences, or poorly written women that are only there to die or be eye candy.  Giving the film a very meta feel.  It is almost like he doesn’t like the genre of film he made.

The violence in this film is strange as well.  It alternates between the dumb over the top kind, but then during the psychopath interviews it gets very real and graphic, and at times horrifying.  McDonagh is subverting what you started to watch this movie for, and instead showing you what this would really look like, and it is not something you are in general really wanting to see.

The actors are all great in this film.  If you know me, then you know that you know that anything with Christopher Walken gets bonus points, and this part was obviously meant for him.  His character is strange, but still totally relatable.  Sam Rockwell’s character almost represents the dumb movie this could have been by just being off the wall crazy, but since he is such a good actor he pulls it off.  Colin Farrell’s character is in the movie mostly to observe the madness, so his role is not as dynamic, but he plays it well.

If you are looking for a movie that is a change from the norm than Seven Psychopaths might be it.  Like I wrote before, I am not sure how I totally feel about this movie, mostly due to its graphic nature, but after I watched the movie it left me thinking, and that is a good thing.