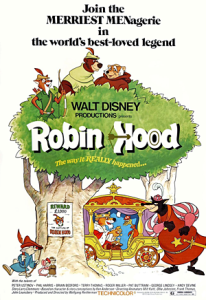 Disney recently re-released Robin Hood on Blu-Ray.  Robin Hood was never considered to be one Disney’s top classics, and that is probably why this re-release was not given the fanfare of a lot of their films, but it is still well thought of, and since my wife is a Disney freak, I decided to buy it for her.

The film follows an anthropomorphic fox version of the titular character as he works to steal back the money that was taxed from the poor by interim king lion Prince John.  Robin Hood is also trying to win the heart of the beautiful vixen Maid Marian.

The film is super simple, and does not tell a deep story, but it is effective.  The shots of all the poor animals in chains are quite moving, and they play Robin as the perfect likable rouge doing what he can to help the people out.

The upgrade to Blu-Ray has done wonders for this film, and it looks great in high definition with its bright colors and well drawn characters.  Some people complain that some of the detail is lost when these old movies are upgraded, but I can see none of that here, and it definitely looks better than a VHS version would on a big screen.

This movie is simple and makes me smile.  It has fun characters and a big heart.  If you are a Disney collector than the Blu-Ray is a must buy, and if not it is still worth it because it is a fun family film that can be enjoyed for generations to come.

2 Replies to “I Revisit Robin Hood!”