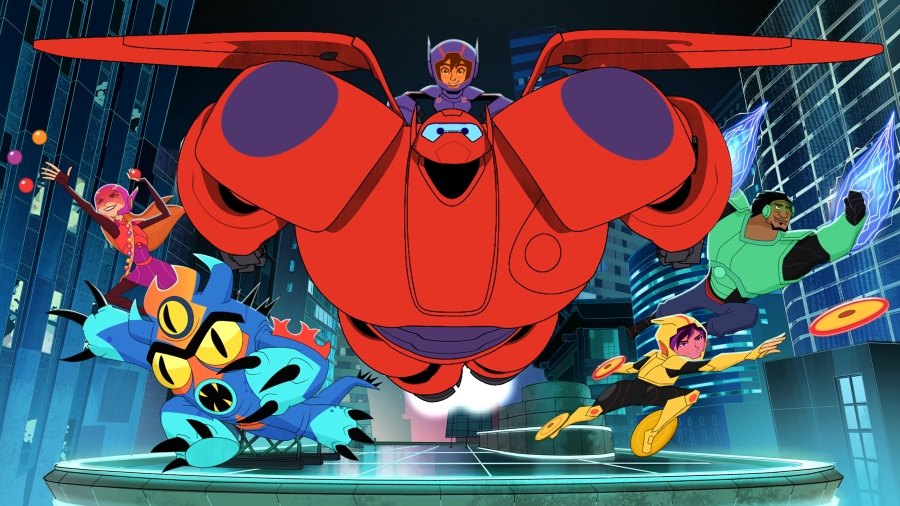 Big Hero 6: The Series had its big premier with the short film (AKA two part episode) Baymax Returns, and while it was entertaining and fun, it was missing some of what made the original movie so good.  Namely, emotional depth.  The feature film Big Hero 6 was all about family and the importance of properly dealing with loss.  Big Hero 6: The Series is apparently going to be an easy breezy kids show.

Baymax Returns is pretty much what happens in the credits of the Big Hero 6 movie.  Hiro finds Baymax’s chip and starts to recreate him.  Meanwhile Fred is trying to convince the team to continue to be superheroes.  They on the other hand feel that their job is done.  Of course this would be a crappy show if they were right, so they are forced to continue to protect San Fransokyo from new threats.  Also, it turns out that they really like being superheroes.

I had a good time watching this show, and if you are a kid in the eight to thirteen demo, you will probably love this show.  It is hilarious, and the animation is well done (at least so far).  Plus, it has a great cast of characters.  The series just doesn’t pack the emotional punch that original Big Hero 6 did, and honestly it makes sense that a weekly TV show wouldn’t.  Disney is trying to sell merch not make kids cry, but it just feels hollow in comparison.

I am not going to rag on Disney XD anymore for making a pretty good show.  It will no doubt be another hit to add to their already impressive staple.  I just hope that Big Hero 6: The Series is successful enough to warrant another film, so we can explore the emotional dimensions of these characters further.  Instead of just laughing at their silly jokes and gaping at the pretty, fast moving action.