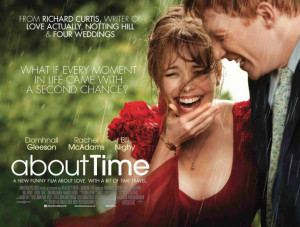 About Time, the 2013 film from Universal Pictures, was hyped as a new romantic comedy from the writer of Love Actually and Notting Hill, but it ends up being more about a man’s relationship with his father, and that is a good thing.  It manages not to get caught in the normal rom-com trappings, and actually be much more engaging and heartwarming.

The story starts off with our hero Tim Lake (Domhnall Gleeson) remembering a bad night, only to be interrupted from his sorrow by his sister (Lydia Wilson) who says his dad (Bill Nighy) is looking for him.  His dad informs him that he can travel back in time in his own life.  He decides to try out his new found power on the aforementioned bad night, fixing all his errors.  Instead of using this power to get rich, he decides that he is going to use it to get a girlfriend.

At first I was apprehensive about this movie because it sounded like the guy in this movie was just going to manipulate women in to going out with him, but the writer Richard Curtis is too smart for that to be the case, so for the most part Tim uses his power for good, and to not be a total looser.  The most gripping use of the time travel is in his interactions with his father.

It should come as no surprise that veteran actor Bill Nighy is great in this film as the father.  He is charming and loving, and he plays a very compassionate father without getting too cheesy.  Domhnall Gleeson and Rachel McAdams play the central couple well.  They make their love affair seem real, and it is great to see them go through life’s struggles together.

This movie really surprised me.  I am used to romantic comedies just using the same old tropes, and tugging at the same heart strings over and over, but a clever plot, and good actors make this a movie worth watching.  If they made more romantic comedies like About Time, the genre wouldn’t be circling the trash bin like it is now.