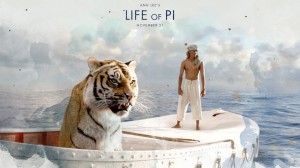 Life of Pi is a 2012 film from acclaimed director Ang Lee based of the novel of the same name.  It was nominated and won the Academy Award for Best Director.  Did it deserve all the accolades? I think so, but the story itself left me a little cold.

The film starts out with a writer asking Pi Patel to tell him his story, so that perhaps he can turn it in to a book.  The writer hadn’t heard the story before, he had just been told by Pi’s uncle that it would make him believe in God.  Pi then begins to tell him his life story, and of course how he survived a trip across the Pacific Ocean in a life boat with a tiger named Richard Parker.

This film is beautifully shot, and the special effects are amazing.  It makes you believe that Pi is indeed in a boat with a tiger.  Which he was not because putting a kid in a boat with a tiger I am sure would brake more then a couple laws, and there a ton of just great show piece effects shots in this movie besides the boy and the tiger.  If you have a Hi-Def TV then you need to watch this movie just to see some of the things they bring to life.

The actors all do a great job in this film, especially Suraj Sharma as the Pi on the boat.  He conveys the loneliness and the resilience of the stranded young man, and since he is most of the movie, his acting is just as important as the effects are, if not more so.

Which brings me to the part of the movie I am not so sure of.  We were promised that this story would make us believe in God, and as a believer in God I don’t need much help, but reason to believe is lame. <Spoiler> The real story is that he was on the boat with people, and the cook brutally murders a sailor and Pi’s mother, and Pi kills the cook, but since the story Pi made up was better, then we should believe in God.  I Think that is the dumbest thing I have ever heard.  God is able to get you through real hard times, not just help you cover up the truth with an amazing lie </End Spoiler>.

This movie is still an amazingly filmed piece of art even if the thesis behind it is deeply flawed, and if you have a good Hi-Def TV it is amazing to watch.  Ang Lee proves once again that he is among the industries current greats.

2 Replies to “What Do We Learn From The Life Of Pi?”