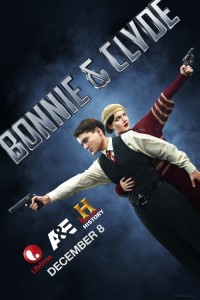 Bonnie and Clyde is a 2013 Lifetime/A&E/History Channel miniseries based on the lives of the titular Bonnie Parker and Clyde Barrow.  It was very successful for the A&E owned networks, but it has been done before and better.

The story starts off with the iconic shot-up Ford being towed through a small town, and some kids uncovering the body of Clyde Barrow (Emile Hirsch).  The corpse then begins to tell us the story of his life, and how he and Bonnie Parker (Holliday Grainger) became the notorious gang leaders.

The problem with this show is that it adds nothing important to the story of Bonnie and Clyde.  It is just an excuse for more sex and violence on television, and because it is based on a true story it can be billed as “educational”.  The problem is that they, like everything based on a true story, like to spice it up a bit.  They decided that Clyde needed the ability to see the future, and that Bonnie Parker’s only will in life was to be famous.

The leads do an admirable job as Bonnie and Clyde, but the script doesn’t give them a whole lot to work with.  I hope they can find more interesting work later.  The gun battles were still fun to watch, and I love all the 1930’s style, but everything between battles and the fashion just fell a little flat.  This may have been better as a ninety minute made for TV movie than a three hour miniseries.

I enjoy the thought of TV networks doing more special event programing like this in the future, but I hope that they can find something a little more entertaining to do.  If you are looking for the best Bonnie and Clyde to watch, it is best to stick with the 1960’s Warren Beatty and Faye Dunaway version.