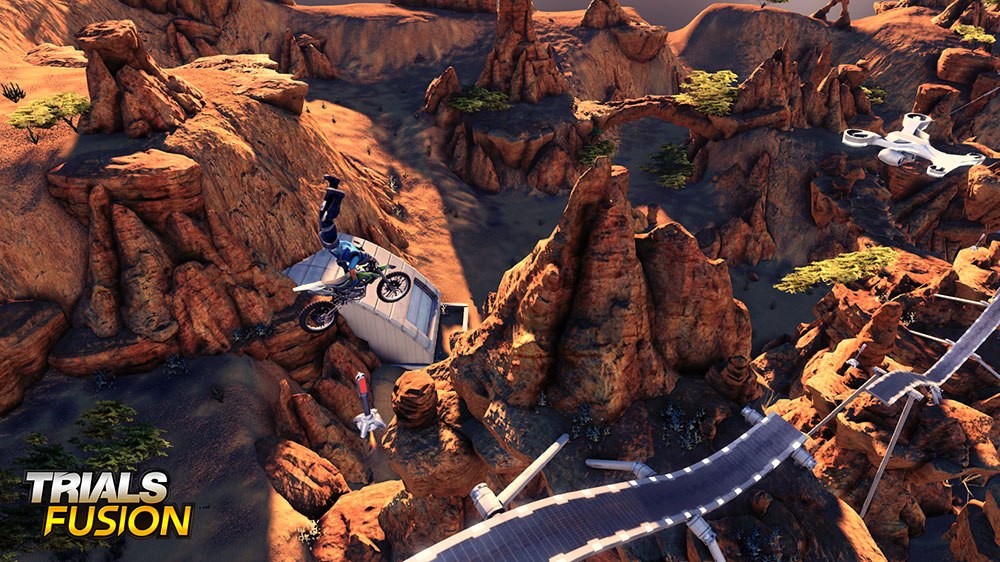 Xbox Live Gold has been kind of on a roll lately.  Delivering games that I actually want to play, and of course not charging me any extra for them.  A game from the service that I am currently playing is Trials Fusion.

In Trials Fusion you do crazy stunts on insane tracks while trying not to crash.  You do this over and over again.  The game is simple to start playing since it is 2.5 D, so you don’t have to turn.  You just hit the gas or brake to try to maneuver your way across the tracks.  Then they throw leaning in to the mix, still not bad.  You got this, and then tricks, fine.  Not a problem.  Finally comes bunny-hopping.  At first this is okay since it is mostly during the flat parts of the tracks, but then you need to bunny-hop while motoring straight up a cliff, and now you will want to throw your controller through your TV.  Still, you feel great once you manage to complete the track.

It is just that difficulty curve comes out of nowhere.  It is like being slapped in the face.  The easy rated tracks you can do pretty much just holding the gas pedal down, and the medium rated tracks just require that you are paying attention, but the hard rated tracks are scream inducing.  While once you get used to the hard tracks, you do get better, but Trails Fusion would have been better had they ramped up the difficulty in a more linear way.

All in all though it is a great game, and one that it is more than worth playing for the price of $0.  Though one other bummer is that they are constantly trying to shove DLC down your throat, but what they give with the base game is more than enough to make most people happy, so just do your best to tune out the constant advertising, and you will have a good time with Trials Fusion.