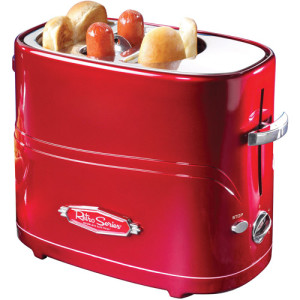 The Nostalgia Electrics Retro Series Hot Dog Toaster looks to be a hot dog lover’s dream, but sadly that dream is a bit of a nightmare.  There are few things easier in this world to cook than an American Hot Dog.  I mean they are already pre-cooked.  You can, fry them, grill them, boil them (please don’t), steam them, hold them over a camp fire, wrap them around a light bulb, or just about any other heat source you can imagine, so you would think that a toaster would be up to the job, but I have found it to be lacking.

Like any toaster it is easy to operate.  Well in theory it is anyway.  You have twist dial on the side that goes from one to five to pick how long you want to cook your dogs and buns, and a leaver which you pull down to start the cooking.  There is also an emergency stop button, just in case.  So being the accomplished toaster-user that I am, I turned the dial to four and put in two hot dogs and two buns, and I pushed down the leaver.  The dogs came out undercooked.  The next two I turned the dial to five, and guess what?  It burned the crap out of them.

It is crazy to me to think that the one thing this toaster was designed to do, it would be bad at.  Sure it did indeed heat up my hot dogs, but it didn’t do a good job!  It has one reason for its existence, and it does it poorly.  I guess I could put the dogs in at five and then watch them, and then push the button when they are ready, but that defeats the purpose of a timer.  Plus it can only do two at a time, so if you are cooking dogs for friends, you would have to use something else anyway unless they like to wait while others eat.  If I had to give this toaster a classroom grade it would get a D+.  It toasted the dogs, but just barely successfully.  It gets the “+” because it looks good doing it.

Pretty much anything that heats stuff up in your kitchen or backyard is going to do a better job of cooking your hot dogs than this thing.  Sure it kind of works, but not well enough to recommend it.  It is such a shame too, because it does look cool.

3 Replies to “This Is Not The Hot Dog Toaster You Have Been Waiting For!”