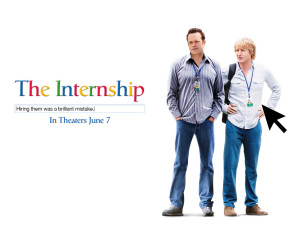 You have got to give Google credit, The Internship is a heck of an add.  That doesn’t mean it is good.  Because it is really not (It is so Bad!).  It is just good for a two hour long employment video.  The fact that they got Shawn Levy to direct it, and Vince Vaughn and Owen Wilson to star in it is just icing on the cake for them.  I hope Google paid 20th Century Fox a lot for this 2013 film because it is incredibly bland, and a little creepy.

The film is about two out of work salesmen, Billy McMahon (Vince Vaughn) and Nick Campbell (Owen Wilson), who decided to lie their way in to an internship program at Google.  They of course get paired with a group of misfits in quest to get a full time job at the tech company.  They have to use their old school charm and wit to overcome their complete lack of tech savvy.  Who knew lying on your resume, and being a smarmy salesmen could land you a job at a Fortune 500 company!

Honestly that description doesn’t sound like that bad of a movie.  Fish our of water comedies can be very good.  This movie is not.  It was a lazy cash grab.  Google must have agreed to this because it makes them look good, and everyone else involved gets paid.  Everything about this movie is derivative, and then to make things worse they pad the running time everywhere: a quidditch match, a bonding strip club scene that refuses to end, and a long support call montage to name a few.

Lets talk about the strip club scene for a second.  It feels like it is half the movie, and it is awkward to watch as these kids “live it up”.  It is even worse when you consider that Wilson and Vaughn are like twenty years older than the rest of the cast, so it makes them feel like those creepy uncles you won’t let your kids hang out with.

Vaughn and Wilson can be funny, and when you see them on screen you want to root for them, but they just play less funny versions of their Wedding Crashers characters.  They are just going through the motions with this film, and looks like the rest of the cast is on cruise control too.  It is a waste of talent all around.

You shouldn’t see this movie.  It is disappointing on just about every level, and if you paid money to see it you are just encouraging bad film making.  Luckily if you do see it, it is completely forgettable.  If I hadn’t had to write this review, I would have blissfully forgotten all about it.  I hope Google got what they wanted out of this film because the people that had to watch it sure didn’t.