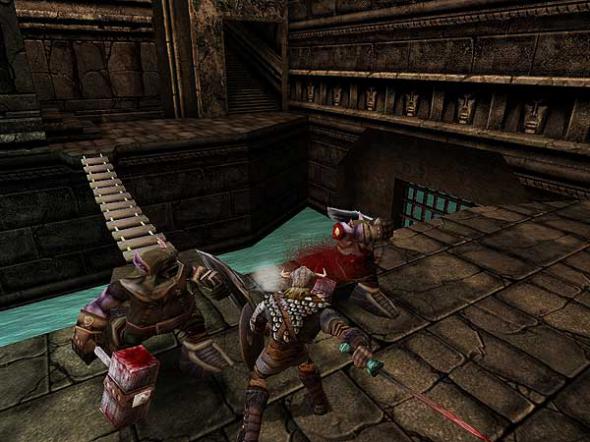 When I was getting ready for my annual LAN party this year I researched which games were LAN favorites, and the game that kept coming up over and over again was Rune by Human Head Studios.  I remember hearing about Rune when it came out in 2000, but I totally missed it.  Which is a shame because it is hilarious fun, well at least the multiplayer is.

The game features hand to hand combat, and it is all about trying to out flank your opponent.  There are shields you can pick up, but if the other players find some of the bigger weapons the game has to offer, the shield will get chopped in two just before you do.  Really what happens in this game is people run around each other swinging big weapons with reckless abandon trying to turn the other player in to goo, or just dismember them.  It is very simple, but it wonderfully executed.  I think we played this game for three hours.  Besides death match there is a game mode called Head Ball where you have to chop off each other’s heads and then throw them in your own goal.  Not as fun as the straight up death match, but a good change of pace.

Everything about this game is as ‘Metal’ as possible. Oceans of blood, Vikings, skeletons, and rivers of acid.  Unfortunately the graphics have not held up well, but that just means it will run on any computer out there.  The gameplay on the other hand is still in top form, and you can find keys for Rune Classic (as it is titled now) for under a $1, so there is no reason not to pick it up for your next PC based get together.  Rune Classic got my LAN off to a great start, and there is no way it will not be on this list for next year.