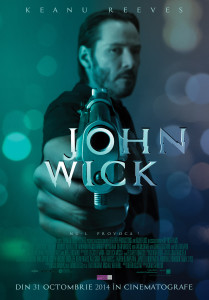 John Wick. In the post-Matrix Keanu Reeves era it is perhaps his best film. The story is simple, man loses his wife, wife gives man a dog, punk kills dog, man cuts a swath of death and destruction across New York avenging his dog. The concept itself it pretty funny, but in the little time we have with the dog the directors, Chad Stahelski and David Leitch, make you the audience actually love the dog too and you wouldn’t mind taking a baseball bat to the entitle Iosef (Alfie Allen).

More than the excellently scripted fight scenes, dialog that plays to Keanu “Whoa!” Reeve’s strengths, and a plethora of exceptional character actors from Ian McShane to John Leguizamo, the thing that really stood out to me was the style and weight to the world this movie was taking place in. The Continental is this world within a world, a hotel and club for hitmen and assassins with its own rules and currency. You get a sense of John Wick’s deep history in this world as he walks the halls so easily, yet he feels very foreign because he doesn’t really want to be there.

For a brief time John Wick was 100% Fresh at Rotten Tomatoes (it eventually settled at 83%) which should tell you this movie is something special. It’s the revenge movie with heart, style, and substance that doesn’t come around very often. If you missed it in the theaters, like a lot of people did, you can rent it on Amazon or pick it up at a RedBox and join me in my morning for the dog.

One Reply to “The Paladin loved that dog”