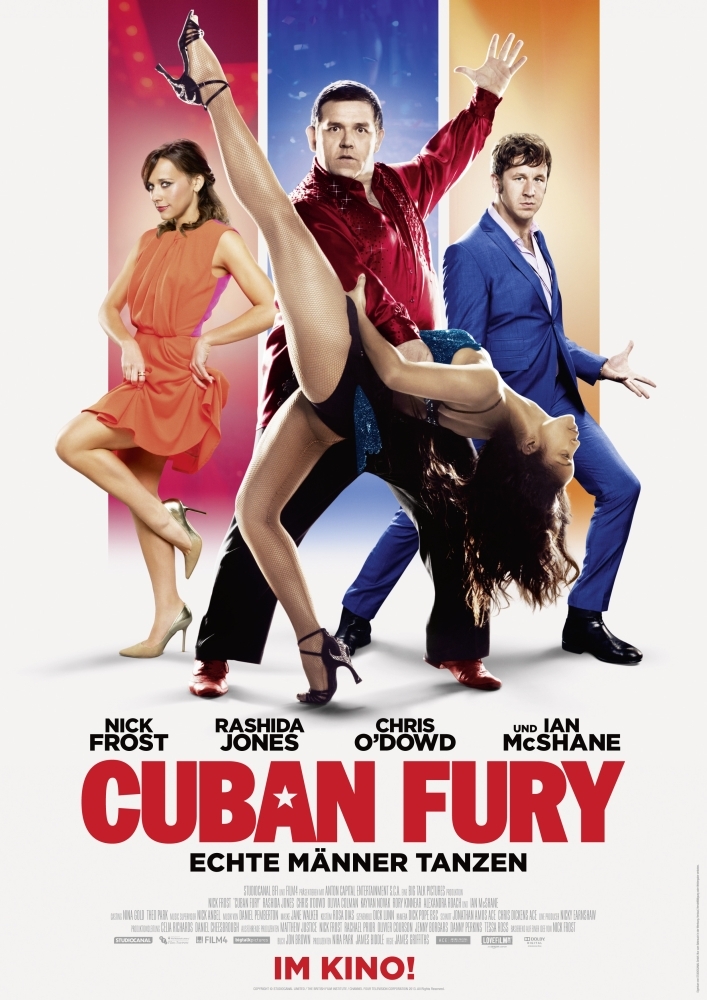 Mrs. The Paladin use to dance, she trained in Ballet, and even was an instructor at a local dance studio; so I have to watch or hear from the other room while I’m hiding on the bedroom a lot of dance movies (she also watches a lot of movies on or about the Holocaust but that isn’t related to dancing – sometimes). So when I saw the trailer for Cuban Fury I knew finally there was a movie for the two for use to enjoy at the same time.

You see, Cuban Fury is a romantic comedy about dancing… Salsa dancing. What’s more, it’s an intelligent romantic comedy about Salsa dancing. The quick rundown is Nick Frost plays Bruce Garrett the adult form of the “Boy with Fire in His Feet”, a teen Salsa dancing sensation who’s given up the fiery shoes for a life of “normalcy”. He’s tormented at work by Chris O’Dowd’s absolutely terrible and awful coworker Drew. He spends his time with his two mates weekly running through a list that reminds us that Bruce and company are not hip with the ladies. Until the American Rashida Jones’s Julia is hired as the new Sales Manager over Bruce and Drew. The obvious attraction to Julia only grows for Bruce when he sees her dancing Salsa. This spurs Bruce to reconnect with his old mentor, played crustily by Ian “Lovejoy” McShane, and reclaim the title of “Boy with Fire in His Feet”. Of course he has to deal with a love triangle, dance-offs, and a body that has forgotten some of the grace it once held.

The thing I love about Cuban Fury is that instead of focusing the comedy on a dancing fat guy, it instead treats Bruce like a real person, who later in life is rediscovering his passion. The reason young Bruce gave up the sequins and silk shirts was that he was badly beaten right before the Regionals, something that enforces the stereotype that boys don’t dance. Bruce then lives a normal life and is actually fairly successful in it, he’s not a loser… just lost. Ultimately the movie isn’t about him winning the girl, which he does *SPOILERS!, but it’s about him pushing through his own barriers to once again find what makes him happy.

Mrs. The Paladin and I laughed a lot through this movie at the situations, characters, and those little silly things that happening in the background or very briefly. There is some swearing and the middle finger is raised a handful of times; things to be aware of for the more discerning viewers out there. Cuban Fury earns Twenty-Four sparkly shirts out of twenty-four sparkly shirts.