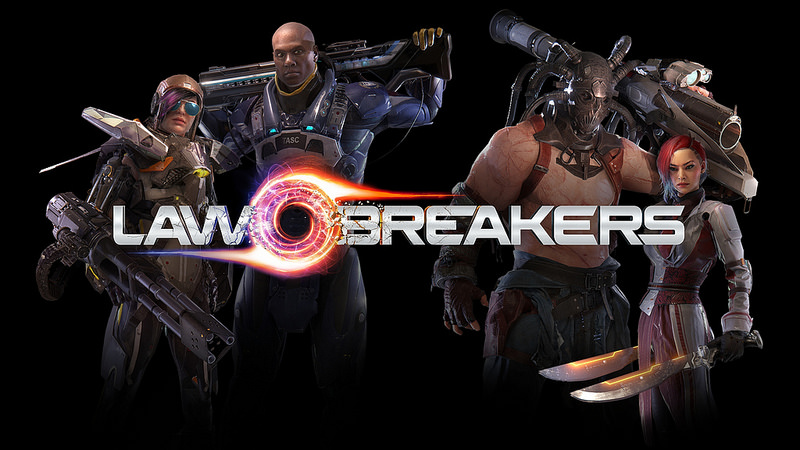 When Overwatch came out everyone was trying to compare it to Battleborn, but in reality, other than their art style, those games were completely different.  LawBreakers, which is in Alpha right now, on the other hand is very similar to Overwatch.  You get a cast of crazy characters and they battle against each other in arena and objective based battles.  What sets LawBreakers apart is that it is much faster, there are ‘low gravity zones’, the game’s aesthetic has much more of a hard edge, and for now the cast of characters is much smaller.  Not surprisingly, due to Cliff Bleszinski’s involvement, it feels a little more like Unreal Tournament.

Currently LawBreakers only has two assault characters, a tank, and an assassin/spy.  I am sure that as the game gets closer to release we will see more characters come out.  I mean half of the fun with these types of games is using characters with completely different play styles, but even with this small roster the game is fun, but you can tell it isn’t polished as Overwatch, though no one polishes a game like Blizzard.  It also feels like it is missing something, like it is tinny or hollow.  I am not sure what it is.  Perhaps it is the lore that isn’t as good, or the weapons lack the kick of Overwatch.  It is trying to hard maybe?  I am not sure.  It just feels slightly off.  Still good, but not quite where it needs to be.

Regardless.  The game is going to be entering Beta soon, and you should keep an eye out for it.  It is fun, and if CliffyB and Boss Key can figure out that little something LawBreakers is missing, this could be a great game.  It has one more weekend in Alpha, so I am assuming we will see a Beta sign-ups soon, and I think you should at least give it a try.  Maybe you can help me and CliffyB (mostly CliffyB since he is making the game) figure out what LawBreakers needs.