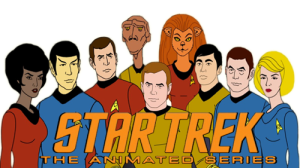 I always thought I was supposed to dislike Star Trek: The Animated Series because it wasn’t canon and the episodes could be a little silly at times, but after watching it, I have to say that I quite like it.  Sure some of the episodes are not great, but in being animated they got to have far more extra terrestrial landscapes and characters.

The episodes range from pretty good to pretty bad, but still it was is another twenty-two episodes with the original cast and crew, so if you like Star Trek it is streaming on Netflix right now, and it is worth the bandwidth.