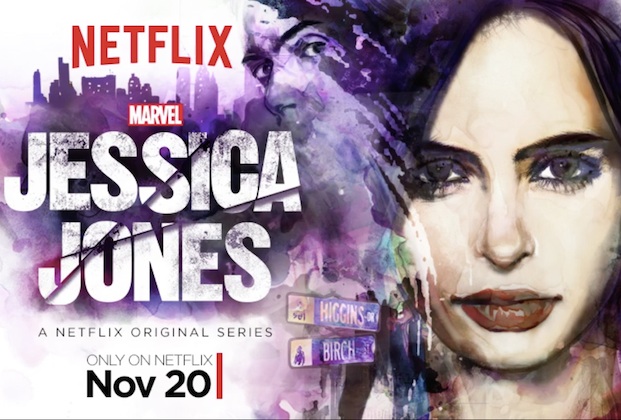 Netflix and Marvel have launched their second attack on my free time, Jessica Jones.  It amazes me to say it, but so far I like Jessica Jones more than their previous outing Daredevil.  Which I loved.  It is because it is so different than anything else on TV.  Daredevil was Marvel’s take on what the CW has been doing well for awhile now, and that is the standard superhero TV show, but a little darker and with a slightly bigger budget.  Jessica Jones on the other hand is a completely different beast all together.

The show is about the titular Jessica Jones (Krysten Ritter) as she runs her Alias private investigation firm, but mostly as she tries to track down the crazy evil Kilgrave (David Tennant).  It starts off normal enough until you start to learn more about their powers.  Jessica is super strong and can jump really far (she calls it controlled falling), and Kilgrave can make anyone do anything he wants if tells them to do it in person.

Kilgrave’s power makes him one of the scariest bad guys Marvel has unleased.  Sure Loki could control people’s minds, but Loki had a certain charm to him that made his deviousness more palatable.  Kilgrave however is pure nightmare fuel.  He doesn’t care about anyone but himself, and his obsession with Jones.  Once a person has served their purpose they are lucky if they are left to go about their normal lives.  He is a spoiled child, and no one can tell him ‘no’.

The acting is top notch.  Krysten Ritter’s Jessica Jones is a very broken woman, but she insures that you see her inner strength pushing through it all and matching her outer strength.  David Tennant is putting the world on notice that he is not The Doctor anymore.  Kilgrave is one screwed up dude, and it will be hard to see Tennant any other way for awhile.  Mike Colter’s Luke Cage has me excited for his new show coming next year.  The Unbreakable Man should be a lot of fun to watch.

Jessica Jones may be Marvel’s darkest and most twisted tale.  It is living up to its TV MA rating, but it is great to see that Marvel has more up its sleeves than just dudes in costumes.  In this case a little sociological horror and some gumshoeing.  Netflix and Marvel have been really knocking these shows out of the park, and as long as they keep releasing them, I will be renewing my Netflix subscription.