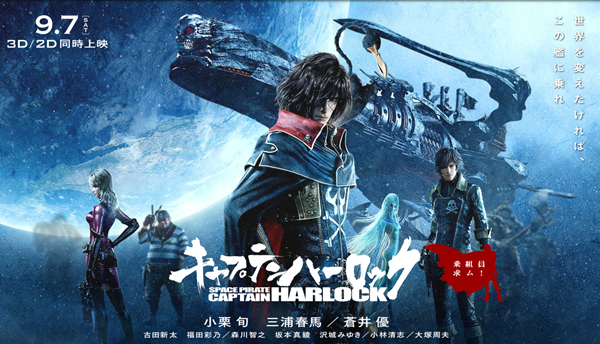 The original Space Pirate Captain Harlock was an Anime classic. It was one of the first Japanese cartoons to come across the Pacific Ocean and do well.  I have not watched a lot of that show, but I am still very familiar with its iconic look and cast of characters because anyone that has any interest in anime has to be.  When I saw the new 3D animated remake pop up on Netflix, I had to watch it.

The movie starts off when a mysterious young man named Yama is recruited to Harlock’s crew.  Will he help Harlock with his goal of fixing the universe, or will he become the Space Pirate’s undoing? Yama will have to uncover the truth about the legendary pirate and the ruling government The Gaia Sanction before he makes his decision.

You would think with a title like Space Pirate Captain Harlock that it would be about the titular captain and not some young upstart, but that is apparently not what Toei Animation had in mind. This movie should have been called “Yama’s Quest featuring Space Pirate Captain Harlock” because then at least I wouldn’t have been disappointed to see the great captain as a side character.  Now Yama isn’t completely uninteresting, but he isn’t a hundred year old rebel leader either.  Sure in the end they kind of bring it all together, but I was left wanting more Harlock.

Odd story choices aside, the 3D animation in the movie ranges from amazing to bad. It feels a lot like cutscene animation from a video game.  Where while the main characters and the environments look great, everything else is stiff, or copied and pasted to save money.  Even though their visual style did look very cool, I did miss the unique look that has made Harlock the anime powerhouse that he is today.  The look that anime studios are still coping.

This movie felt almost as if they were being forced to make a Space Pirate Captain Harlock movie.  They had to use the title, and kind of make it look the same, but they really wanted to make movie about this new young Yama character.  Then they used Harlock’s name and brand to sell it.  Like I said, they did try and fix it all with the ending, but by then it was too late.  This review may have sounded like I hated this movie, and that is not the case.  It is kind of a cool flick.  I am just disappointed because I wanted to see a Space Pirate Captain Harlock movie.