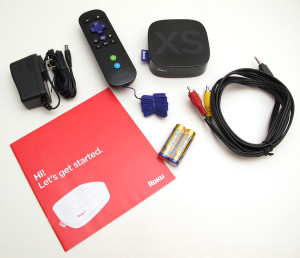 My wife and I decided to setup a TV in our bedroom for occasional viewing, and my wife did not want a bunch of cables and boxes lying around, so I used the opportunity to buy a Roku 2 XS.  This used to be Roku’s top of the line streamer, but it was replaced by the Roku 3 this year.  The Roku 2 XS steams in 1080p, has a wired network port to supplement it wireless, and has a motion remote to enable some video games.

What I like about this box is that it is super small, so it doesn’t get in the way, and even though it includes standard definition cables, you would usually set it up with an HDMI cable.  It has most of the streaming channels that you would expect: Netflix, Amazon Prime, Crackle, and many more, but it is missing YouTube which is unfortunate.

I was also recently put off by the fact that my HBO Go will not work on the box because Comcast has decided that it will not allow it.  This is hardly Roku’s fault, but I feel that Roku should be leaning on Comcast as much as possible to get this app to work.

If you need a cheap streaming solution, the Roku is perfect for that, and it looks like it is adding new options all the time.  If they could get HBO Go to work on Comcast, and add YouTube it would just about perfect, and since the new Roku 3’s are coming out you can find deals on all the Roku 2’s right now, so it is a good time to pick one up.