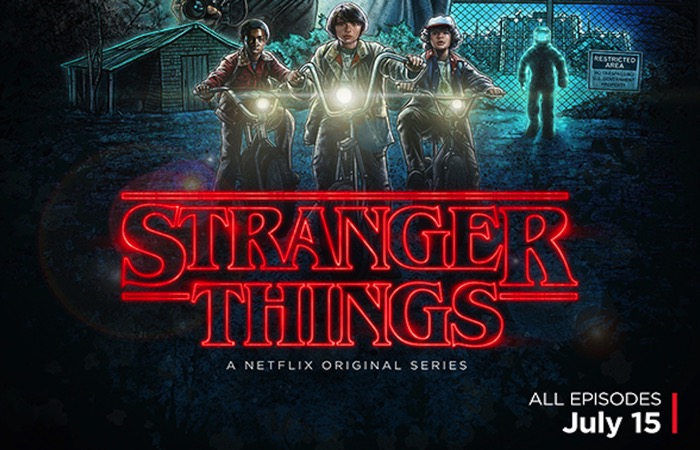 Do you miss the kids adventure films and slow burn horror flicks from the 80’s?  If you do, Stranger Things the new series on Netflix will be right up your alley.  Much like the movie Super 8, Stranger Things is an ode to the Spielbergian films of our past, but don’t get the impression that Stranger Things is just a nostalgia trip.  It would be good even if it didn’t play to the audience’s film history.

I would usually give a plot synopsis, but this is the kind of show where I don’ want to give anything away, but let’s just say there are a lot of kids on bikes and strange G-Men.  Which you would expect from a show like this.  It is also sad, scary, and darkly funny, so be prepared to cry, scream and laugh.

The cast is wonderful.  It is really great to see Winona Ryder in something substantive again.  It is a shame we haven’t seen more of her recently.  Maybe after this casting directors will remember why they loved her so much just a few years back.  The kids of the show all pull the own weight especially Millie Bobby Brown as Eleven.

Pretty much what I am saying is that you should watch Stranger Things which is ready to stream right now on Netflix.  The only real bad thing I can say about it is that the first season is only eight episodes long, so you will probably blow through it in a couple of nights, and then you will have to go through Stranger Things withdrawal.