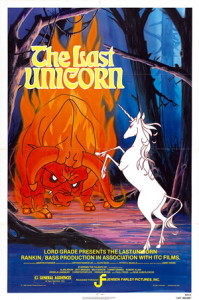 My buddy Daniel recently watched Willow, and it made me want to watch a fantasy movie from my childhood, and thankfully Amazon helped me out by having The Last Unicorn on its Prime streaming.  The Last Unicorn was made by Rankin and Bass, and released by ITC in 1982.  It was animated by Topcraft who went on to be the founding members of Studio Ghibli.

The story follows a unicorn (Mia Farrow) who is told that she is the last of her kind by a knowledgeable woodsman, so she is off on a quest to find out what has become of them.  She is joined on her quest by Schmendrick the Magician (Alan Arkin), a cook Molly Grue (Tammy Grimes), and later the dashing Prince Lir (Jeff Bridges).

The story of this movie is simple and only ever follows one track, but it is sweet and enduring.  It is also a little more edgy then I remembered it, with a three breasted harpy, and a tree that tries to kill Schmendrick with her bosoms, but those moments pass quickly and return the movie to the charming children’s tale that it is.

The cast they got for this movie was unheard of for an animated movie in the 80s.    Besides the cast I mentioned in the plot description it also featured Angela Lansbury as the witch Mommy Fortuna, and Christopher Lee as King Haggard.  They all bring life to their characters which is good because the animation doesn’t hold up.

The stills in this movie are good, and they created some awesome imagery, as well as cool character designs, but when it is moving it is not that great.  I think the low budget really hurt this movie on the animation front.

The music in this movie is pretty annoying also.  They got America to sing the theme and Jimmy Webb to write the songs, but they all seem to fall flat and distract from the movie instead of add to it.

Despite its shortcomings the good story and amazing actors make this movie great, and it brings back good childhood memories.  It is worth a watch if you are looking for some nostalgia, I am glad I did.