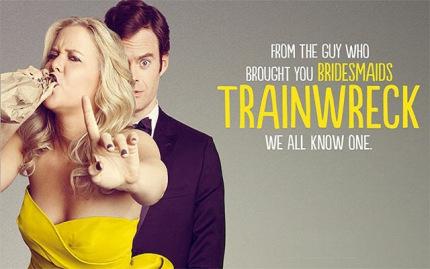 Trainwreck has everything going for it: An in demand rising star, Amy Schumer; A top comedic director, Judd Apatow, and a producer that has overseen some major comedy hits, Barry Mendel.  So it is no surprise that this movie was a financial success.  However, the movie ended up being uneven.

Trainwreck is about Amy Townsend (Amy Schumer) who has problems committing to relationships, partially because of her parents divorce.  He father (Colin Quinn) even has her and her sister (Brie Larson) chant “monogamy isn’t realistic”.  Amy simply goes from party to party and guy to guy until she meets sports doctor Aaron Conners (Bill Hader).  Can she change her philandering ways?

The story works overall, and it is a great setup for Amy Schumer to play off of, but the problem is that Trainwreck can’t quite decided if it wants to be an over-the-top raunch-fest, or a more serious dramedy, so the pace of the film swings pretty wildly.  It either needed to be more crass, or less.  This is a common complaint these days with Judd Apatow, and I appreciate that he is trying to elevate the ‘R’ rated comedy, but he is going to have to try harder, or find different script writers.

Luckily Amy Schumer’s great performance keeps this movie watchable.  She is definitely more at home with the wild antics than the drama, but she was able to do both aplomb.  I also have to give a hand to Tilda Swinton as Amy’s boss at a magazine in her least Tilda Swinton role ever.  I didn’t even know it was her until my wife pointed it out.  The rest of the cast is made up of SNL cast members and other known comedic talent, so they all do a wonderful job.

It is a shame this movie couldn’t quite pick a gear.  The cast would have been up for it either way.  Still, as it is Trainwreck is a watchable film if you are in the mood for an ‘R’ rated flick.  I just think it could have been better.