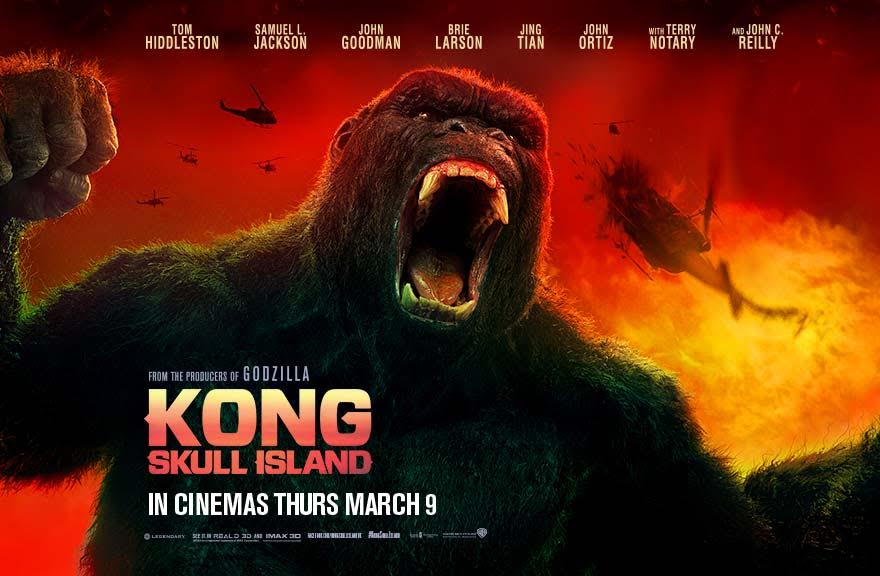 It seems like every decade or so someone gets the bright idea to make another King Kong movie, but this time they decided that it would make sense to put Kong in the same universe as Godzilla.  While the King of the Apes doesn’t go head to head with the King of the Monsters in Kong: Skull Island it definitely plants the seeds for that epic mashup which happens May 2020 after the next Godzilla movie next year.  With all that crossover business behind us, the question becomes is Kong: Skull Island good by itself? Yup, it is a fine popcorn movie, but I doubt it will become your favorite movie.

Kong: Skull Island begins at the end of the Vietnam War when John Goodman convinces a Senator to let him take a helicopter squadron and a bunch of scientists to an uncharted island.  He hopes there will be monsters there.  Guess what? He is right, and they find Kong who isn’t happy to see them.

The story is fine, but it is pretty much an excuse to have a cool scene with a lot of helicopters fighting King Kong while blaring awesome 70’s music.  Which is something I can get behind!  It is a pretty epic fight, and then after that a bunch of monsters slowly reduce the survivors to a fraction of their original number.  I know it sounds like I am giving away spoilers, but this is what Legendary and Warner Brothers promised us with their marketing, and they delivered.

There are a ton of people in this movie, but for the most part just the pretty ones, John Goodman, Samuel L. Jackson, and John C. Reilly matter.  On top of that only John C. Reilly seems to know he is in a cheesy monster movie.  Everyone else must have been told they were making the Kong version of Apocalypse Now.  Reilly makes this flick better every time he is on the screen.  Other people mostly provide excitement when they get eaten or smashed.

Even if you haven’t seen the new Godzilla or care about yet other shared universe, Kong: Skull Island is a decent movie on its own.  If you do care about those things, it is fun to see all the Easter Eggs for future films littered around.  Kong: Skull Island should be hitting streaming services soon, and there are worse films to spend a couple of hours with.  I enjoyed myself.  Just make sure to forward your way through the credits for one final King Kong vs Godzilla teaser.