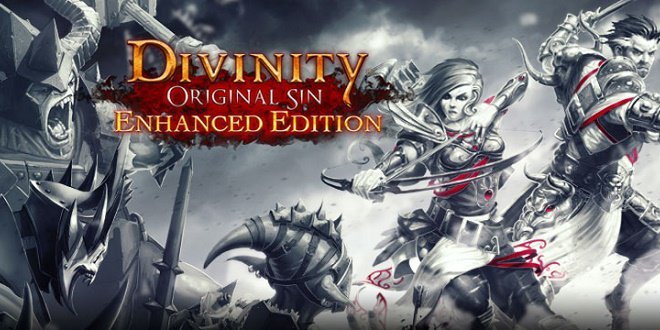 It has been a while since I have played an old school deep turn based RPG, but the lure of Co-Op, the great reviews, and a decent sale, led me to try Divinity: Original Sin.  For the Co-Op, I dragged The Paladin along with me.  I bought him a copy of the game for his birthday, very self serving of me I know.  I am not very far in to it yet, but I have to say I am liking what I am seeing.

Divinity: Original Sin starts with your main characters off to Cyseal to investigate a murder of a high ranking official to see if the mysterious magic “Source” was involved.  You see you are playing as “Source Hunters”.  A group of people tasked with keeping track of this powerful and dangerous magic.  Things get all timely-wimey after that, but lets just say there are far greater things at stake than some official getting offed.

The gameplay for the most part is standard turn based fare.  Each character gets a set amount of action points, and on their turn they get to spend those points moving, attacking, defending, or helping teammates.  Where things get different is that Larian Studios loves its environmental effects.  Your characters are always wet, hot, oiled, or poisoned, so you get to try and plan your attacks based on what is going on around them.  Is it raining?  Maybe you should freeze everyone.  It will be super effective.  Your team on fire?  Cast a rain spell to douse the flames.  Obviously if you have a good wizard they can bend the environment to best suit your group’s attacks.

Another fun addition is that unlike most Co-Op games in Divinity: Original Sin you and your friends do not need to agree on the dialog.  You see him making a decision that you don’t agree with, you can try and override him.  If you can’t come to an agreement you literally play Paper, Rock, Scissors to come to a conclusion.  It is fun to screw with your teammate every now and then, and possibly destroy a quest tree.  The Paladin had us kill some drunk guards instead of just following them to some guy to prove who we were.  It was pretty funny.

Not everything is peachy keen however.  When playing with your friends you can’t see what they are doing, so there is a lot of down time while you are waiting for their turns in combat.  Movement is kind of slow, so it feels like it takes forever to get anywhere, and most unfortunate of all, there is no quest management system.  I understand that Larian wanted Divinity: Original Sin to be a throw back, so they mostly leave you to solve the quests as best you can, but there should be some way to organize or filter your journal so can try and stay on task instead of randomly milling around in the wilderness.  Also be sure to save.  The game doesn’t auto-save.

Divinity: Original Sin is a fun RPG, and it definitely has the ‘just one more thing’ hook.  Every time I have played with The Paladin three hours seemed to just disappear, and that is the mark of a good game.  Not to mention that I can count the number of good Co-Op RPGs on one hand (not including MMOs of course).  Larian Studios is working on a sequel, if they can speed up the game a little bit, and let folks manage their quests a bit better Divinity: Original Sin 2 will be worth looking out for.