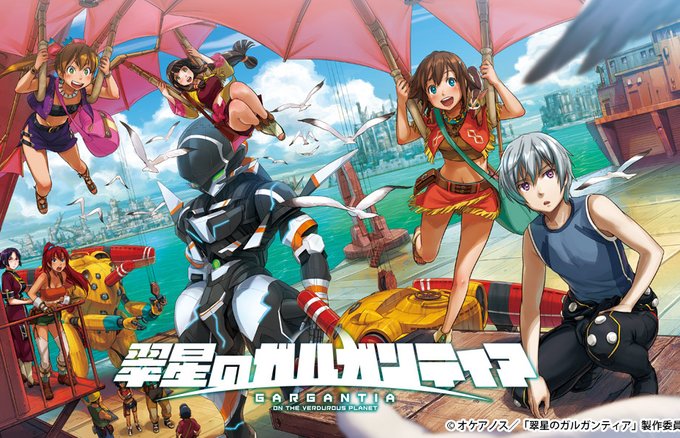 I have been jonesing for some anime, so I fired up ‘Gagantia on the Verdurous Planet’ on Netflix.  For the most part it had what I wanted: mecha, evil squid, and a post apocalyptic world filled with massive boats.  Pretty much Gargantia is the anime equivalent to Water World, but much more watchable.  Not great, but it did the trick for my neglected anime habit.

In the future the human race has left Earth and is at war for its survival against the strange squid like creatures the  Hideauze.  That is until one day a Machine Caliber (the show’s name for mechs) pilot, Ensign Ledo, is sucked through a wormhole and deposited on Earth, a planet he was told had been destroyed.  The world has gone through some changes, and it is now covered in water, so people live in massive flotillas and dredge up stuff from the ocean’s floor.  It is a difficult yet peaceful life, and not one Ledo is sure he can get used to.

‘Gagantia on the Verdurous Planet’ has all the usual stuff: a random fan service episode, questions about humanity, and teenagers taking on responsibilities that they shouldn’t, but it was still well made and engaging.  As a matter of fact I blew through it in a couple of days.  I wish there was another season or two.  Mecha Water World is just the sort of thing this anime freak is down with.

Now if you are looking for an anime that changes things up and pushes the boundaries of the medium, you will be disappointed.  Gargantia is an above average standard anime tale, but that was enough for me, and one that I think a lot of anime fans like myself would enjoy.  Plus it is on Netflix.  In other words, if you like anime give ‘Gagantia on the Verdurous Planet’ a shot, if you are burned out on anime, or just don’t like it, you can skip it.  Nothing new to see here.