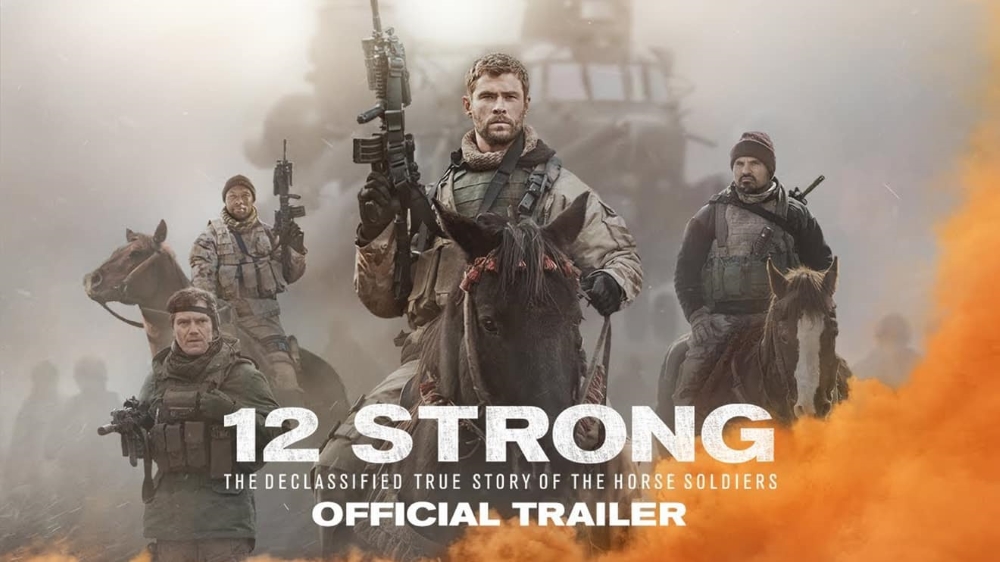 Post 9-11 Afghanistan war movies generally fall in to two categories, critiques on America’s wars in the Middle East, or super patriotic action flicks.  12 Strong is definitely the latter, but it tells a compelling story about the first boots on the ground after The World Trade Center attacks, and their stunning victory.  I am not sure how much of Jerry Bruckheimer’s war tale is true, but it shines a light on some of America’s recent forgotten history.

12 Strong starts on September 11th with Captain Mitch Nelson (Chris Hemsworth) settling in to his new home.  The towers fall and he is in to his military base getting ready to head out.  The job he and his eleven squad-mates are tasked with is aiding the Afghanistan Northern Alliance by calling in air strikes on the Taliban.  They are riding horseback against heavy odds in extreme conditions, but they get the job done.

12 Strong never lets you doubt these men are going to succeed, which ruins some of the tension, but it is amazing to catch a glimpse of what they had to go through to destabilize the Taliban so soon after the attacks.  It is a shame that so much of what these guys did was classified for so long, but I guess aiding a rebel group against former allies probably needed to be handled with some discretion.

They got a great group of actors for this movie: Chris Hemsworth, Michael Shannon, and Michael Peña just to name a few.  They were all believable in their roles, even if Hemsworth did seem too pretty to have spent three weeks in the dessert, but this is a Jerry Bruckheimer movie, so everyone has to look great all the time.

My biggest critique of 12 Strong is that it is about thirty minutes too long.  Some of the movie felt a little redundant, so they could have done some editing to make this a much tighter and better movie.  Still, as it is, it is pretty enjoyable.

For a movie that was dumped in to the January wasteland of feature films.  12 Strong is a decent war movie.  It is not overly stirring, and it will not make you think about the complex politics about what is going on while these guys are riding their horses against overwhelming odds, but not all films need to.  Some movies, 12 Strong included, just need to show our military out there doing their job, or at least a Jerry Bruckheimer-ed super-explode-y approximation of it.