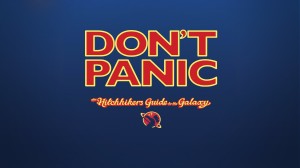 I just recently finished the fifth book in The Hitchhiker’s Guide to the Galaxy trilogy named Mostly Harmless, and I was once again stuck at how funny Douglas Adams’ series is.  It is the only book series that I know of that makes math and sciences jokes so often and so well.  He also had an amazing talent for describing the most mundane things in the most extraordinary way.

Mostly Harmless kind of ends the series on a somber note, and I was surprised that there was not one more chapter to say “Just kidding!”, but the book is still and excellent read.

There is a sixth book in the trilogy, but is not written by Adams, but another gentleman, and I am sure that he is fine writer, but I think I will just stick to these classic five books.

If you have ever had an inkling about trying this series, let me tell you it is an absolute must.  The books make me so happy when I read them that I may just have to read them all over again.