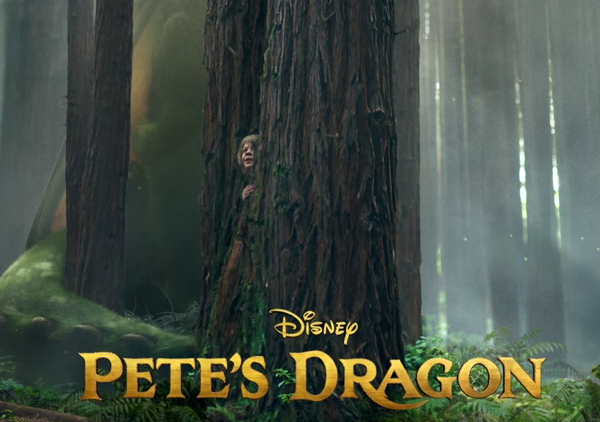 Like with all things Disney, Pete’s Dragon got a remake.  The question is, is it any good?  Sure, it is okay.  It is a fine family film, but I don’t think it will be many people’s favorite movie.  It will be something to watch before you put the kids to bed, and you will not need to pay a lot of attention to it.  If you were a major fan of the 1977 original, this movie is nothing like that one, other than the titular Pete and his Dragon.

The original movie was a musical that took place around the turn of the 20th Century.  The new movie starts in 1977 (clever) then fast forwards to 1983.  In the original Pete’s Dragon, Elliott the Dragon got in to all sorts of mischief while he was invisible.  The new Elliott stays in the forest until an orphaned Pete (Oakes Fegley), who he has been taking care of, gets taken from him, and he has to find him.  Then Elliott gets hunted by some loggers.

At least unlike the other Disney remake’s, this movie is not a shot for shot update.  It is a new movie with a similar premise, so if you like movies with invisible dragons and Petes, the two Pete’s Dragons are just what you are looking for.  If you wanted an update to the previous film, you could be disappointed.

The acting is all what you would expect for a movie like this.  It is all a little too sappy and sweet.  Even Karl Urban as the ‘bad guy’ isn’t really that bad.  He is just trying to make ends meet, and he thinks a dragon is a great way to do that.  Which it probably would be.  If there was some way to keep a massive dragon contained.

If you need a movie to watch with your kids, and you have seen everything else, the 2016 Pete’s Dragon is a fine choice.  As is the 1977 movie.  Though neither of them, while well thought of, are going to be held up as true Disney classics any time soon.  I liked it, my kid liked it, and my wife liked it.  I just don’t think any of us loved it, but hey it is on Netflix, so that is good.