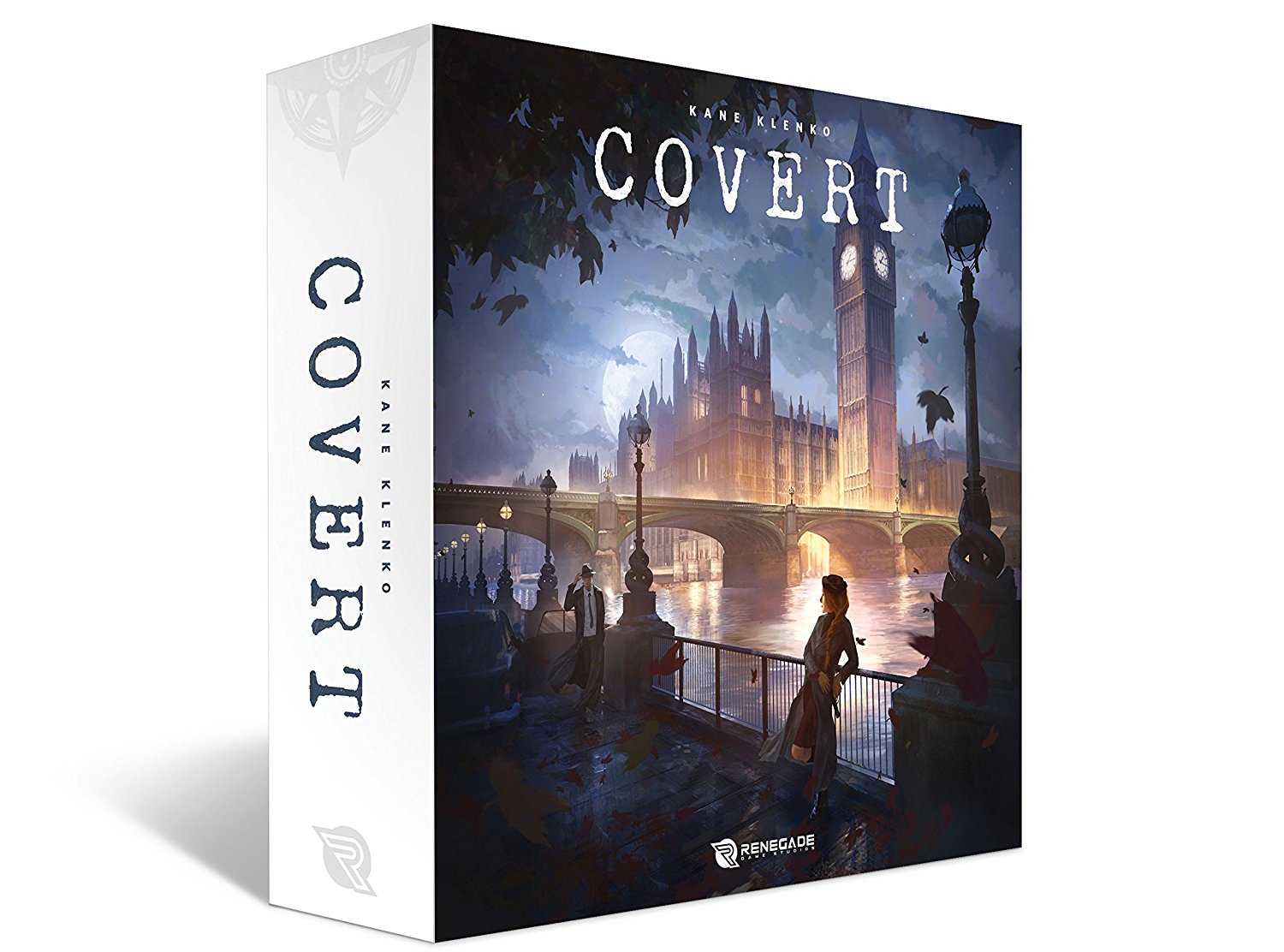 Look at me giving another board game review!  Hey I get away from my TV sometimes… Anyway today I am going to review Covert by Kane Klenko and published by Renegade Game Studios.  Covert is a worker/dice placement game, so kind of like a mashup of Pandemic and Lords of Waterdeep, but still nothing like those two games.

In the game you are in charge of a spy ring, and it is your job to move the spies where they need to be while finding the equipment they need to complete their missions.  Other players are of course doing the same thing.  While you can’t outright attack other players, you can block them from being able to make the moves they want to make thanks to Covert’s clever dice placement system.

Much like Lords of Waterdeep you will have Mission Cards, and on these cards will be the things you need to get/do to complete your mission, like a shoe-phone, a spy camera and a spy in Minsk.  To move your spies and try and get those resources you place dice in the areas with the actions that you would like to do.  To help you visualize this let me give you a shot of the board: 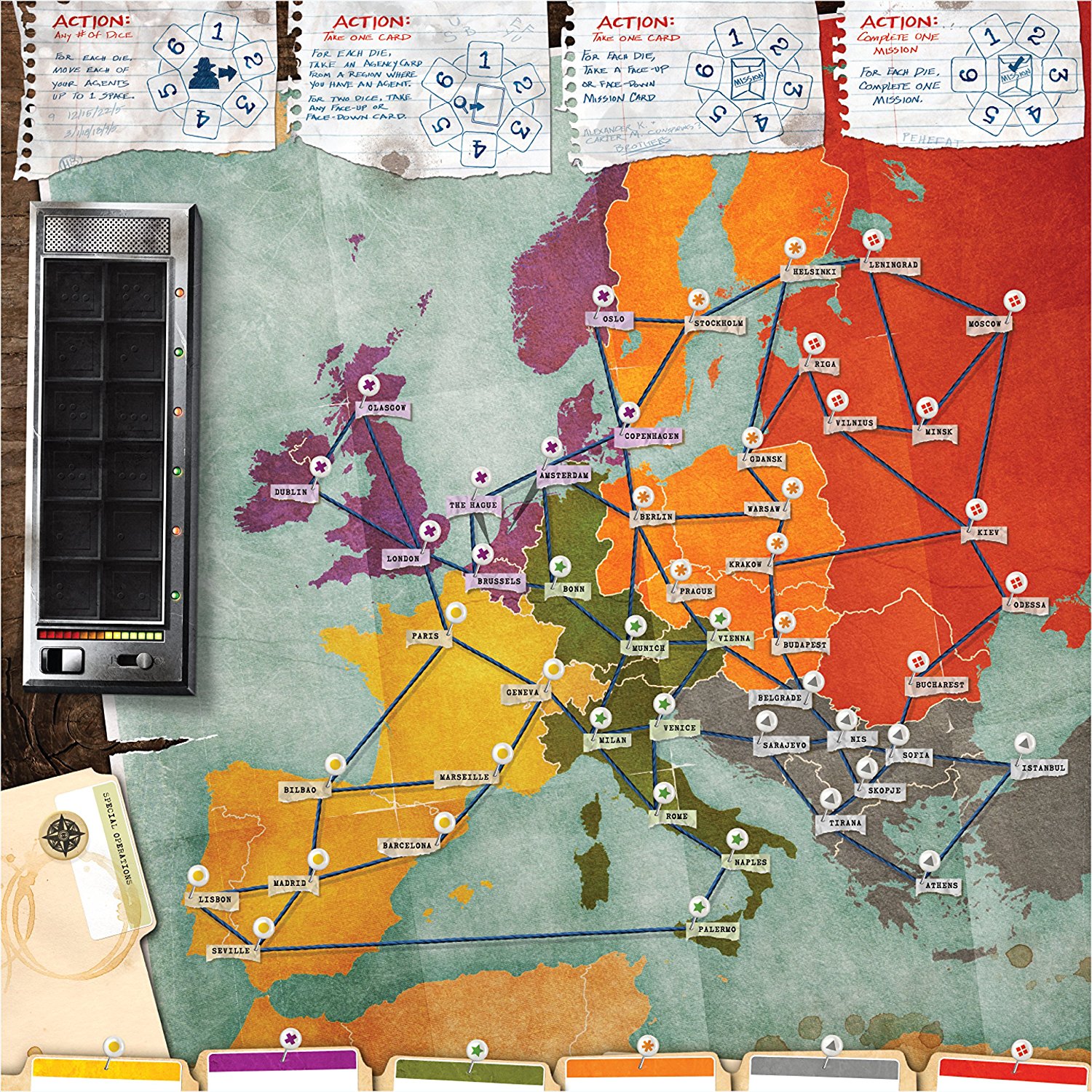 As you can see along the top of the board are action wheels with the numbers one through six.  At the beginning of every round players roll five dice, and then take turns placing the dice in those wheels.  The trick is that once one person has placed a die in that wheel, the next person that wants to do that action must place a die next to the existing die, so if one person places a six in the ‘Take a Card’ area the next player would have to put down a one or a five.

Now we can see each other’s dice, so if I see you only have fours, threes and a one, and I have a one and I get to go first.  If I put my one down somewhere you will not be able to place in that area unless I or someone else plays a five or a two.  Luckily this game offers a lot of ways to get things done, so you should never get too stuck.

That gray grid on the side of the board pictured above will have numbers in it from one to six.  It is the code cracking area.  Every player will get to use the code cracker once per round.  If you can crack a code, you get a resource you can use for your mission or hold on to for two victory points.  Also the main cards of the game, ‘Agent Cards’, have multiple uses.  Each card has not only an item like a shoe-phone on it, but a plane ticket to a city, or a random little ability, like to perhaps change a die number by one, or take a discarded card.  Can’t get in the ‘Take a Card’ action wheel? You can earn Agent Cards by picking up intel cubes the other players leave behind while moving around the board.

Don’t have any cards, and none of your dice work?  You can buy ‘Special Operations’ with extra dice, and they have the special abilities from the cards, so they let you alter the game.  Not to mention every spy leader has a special ability, like being able to move the code cracker twice,  move agents for free, or look at cards before drawing them.  All sorts of good stuff.  To give you an idea of what this all looks like, here is a shot of the back of the box with a fully setup game: 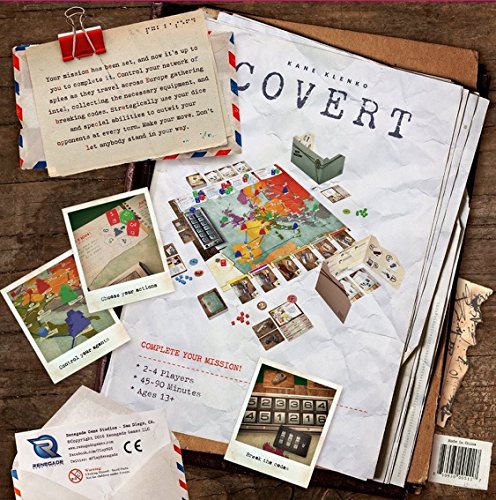 Now, I got more in to game mechanics then a I wanted to with this review, but I think it is important that you realize that there is a lot going on with this game.  It is not just place a worker and get a thing.  It is a puzzle, but none of the puzzle pieces are hard to understand or explain.  To people who play a lot of board games, they can start playing this game in ten minutes.  Others who don’t understand the worker placement genre, it may take a little longer, but not much.

I love how crunchy and think-y Covert is.  Every round you are trying to make sure you are not missing an avenue to get what you need or delay another player from getting what they need.  The only downside is that some people may think too long, dragging this game out.  I have only ever played Covert two player, but I could see four players being a bit much.  Anyway, I think this a great game to have, and a good take on the worker placement genre, so if you find Lords of Waterdeep too shallow, you can dive in to the deep end with Covert.