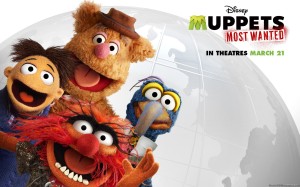 I am a huge Muppets fan, so obviously I went to see the new film Muppets Most Wanted over the weekend, and while it was good, I couldn’t help feel a little disappointed.  It had all the songs and celebrity cameos that I could want, but it seemed that it was lacking the love that Jason Segel brought to the table.

The movie starts directly after the first movie with the Muppets realizing that the cameras are still on, so that the studio must want a sequel.  They then go directly in to the funniest song of the show about how they are making a sequel.  It that contains the unfortunately true joke that sequels are sometimes are not as good as the first movie.  For their next movie they decide that they are off on a world tour, but the world’s most dangerous frog Constantine is going to use it as a cover for his heists.

Whoever wrote this movie must have just thought that the Muppets are just about music and cameos because this movie is loaded with both, and they are both used quite well.  The problem is that the pacing of this movie is off.  The movie will feel like it is flying along with songs and jokes one minute, and then it comes to screeching halt the next.  They just couldn’t quite make the movie engaging when they were telling the actual story.

The main human characters, Tina Fey, Ricky Gervais, and Ty Burrell, all know how to ham it up, and they were fun to watch.  I was quite pleased that this movie was indeed all about the Muppets, so that it was a “Muppet” movie, and not just a movie that seemed to have some Muppets in it.  I just think that they needed someone around that knew how a Muppet story should work.

This movie was fine, and it is not the worst Muppet movie that has been made.  It is just a shame that they couldn’t keep the movie from dragging in places.  I just have to hope that enough people will watch this movie, so that Disney will want to put the Muppets on screen again.