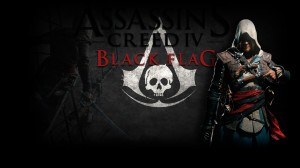 In the story you follow an eager young pirate Edward Kenway, who happens to be the father and grandfather of the protagonists in Assassin’s Creed III, and is not yet an Assassin.  Through a series of events he ends up joining their order and helping them to find yet another ancient artifact that can save the future.  In the present you work at a game company Abstergo Entertainment that is more then it seems.

Sadly the story is the probably the worst part of this game.  It is basically the same story from every Assassin’s Creed game with the exception that the main character is not really an Assassin.  He is just a jerky pirate that decided helping the Assassins would get him a little extra money.  Though that change is very welcome because at times he feels the same level of apathy about the Assassins that I do.

What makes this game awesome is the giant open Caribbean for you to explore and plunder.  You want to do battle with the English or Spanish and add their ships to your fleet?  By all means!  You want to hunt for whales or shoot helpless rare animals so you can make yourself cool gear?  You should do that!  You can even follow the main quest if you want, but the pirating is just fantastic.

Your pirate ship controls well, and there are a ton of upgrades to buy to make the Jackdaw the most formidable sea going vessel in the ocean. To upgrade it you will need to board ships and take their plunder, so you can earn money with their rum and sugar, or gather materials like wood, cloth, and metal.   Every time you take a ship, you can either use it to repair the Jackdaw, coerce the enemy’s crew to reduce your wanted level, or add it to your fleet.

If you add them to your fleet, there is a mini game where you send your boats on trading missions, and they bring back money and treasures.  It is a fantastic little time waster, and if your friends have the game they can help your fleet along its way.  This game also fuels your need to take bigger ships, so they can take more cargo across the world.

The on land parts of this game are pretty much the same as in all other Assassin’s Creed games, but they have continued to refine it, so it is a good change of pace from shooting enemy Man O’ Wars in Tortuga.  There are a ton of missions to do, and treasure to find, so you shouldn’t run out of stuff to do on dry land.

This game has a multiplayer mode, but I am not very good at it, and it never was that interesting to me.  If that is your thing though it does add even more value to an already massive and worthwhile game.  If they add a ship versus ship mode that would be awesome, but there isn’t one as of yet.

The graphics range from amazing to awful depending on what you are doing.  If your ship is in the middle of a storm with whales jumping around it looks stunning.  If your character is just randomly talking to another character it can look quite dated.  This is no doubt due to it being port of a previous generation game.

I really enjoy this game, and if they can ever create a story that I can care about then it looks like the future is bright for the Assassin’s Creed games.  For now however, you can find me pillaging the high seas because Assassin’s Creed IV got its hooks in me.

One Reply to “Sail The High Seas In Assassin’s Creed IV!”