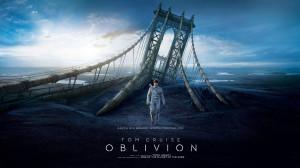 Oblivion was one of the several Sci-Fi movies that came out in 2013.  It was directed by Joseph Kosinski (Tron: Legacy) and released by Universal Studios.  It is a solid effort that just lacks that little something extra that would have made it a good film, but as it is, it is just beautiful but forgettable.

The story is about a drone maintenance worker Jack Harper (Tom Cruise) that is one of the last humans on Earth since it was all but destroyed in a battle against aliens.  He is constantly under threat from the remaining aliens on earth, and he is questioning the wisdom in leaving the Earth behind for Titan.

The trailer gives away one of the major plot points for this film, but I will refrain myself doing the same.  That being said this movie is mostly about the beautiful vistas of a destroyed Earth, and shattered Moon.  This film feels a lot like Kosinski’s previous film Tron: Legacy in that it is all style and light on the substance, but Tron has a lot more style.

Since this movie is mostly about Tom Cruise’s character, he thankfully turns in a good performance as the small time worker questioning the plans of his leadership.  The other actors in this movie are mostly just in it to provide little plot points for him on his journey.  They are all good, but mostly inconsequential.

This film is beautiful to look at, but there are only a few locations, so once I had seen them, I just wanted them to hurry up with this movie.  It could have easily been thirty minutes shorter and been a much better movie, or if they wanted to keep the length then they would have needed to rework the script.

This movie needed a new editor, or a more lively script to make it in to a good movie.  A trailer that didn’t give away major spoilers would have been nice too.  That being said it is still kind of a cool film, and a decent diversion for a couple of hours.  Since Joseph Kosinski is proving that he has such a good eye for Sci-Fi imagry, I am interested in seeing what he does next.