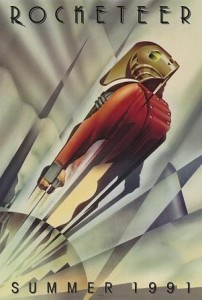 The Rocketeer was released in 1991, and it was directed by Joe Johnston.  It is based off of a comic book character of the same name that came out in 1982, and it also one of my friends’ favorite movies, and it is easy to see why.

The story starts with some FBI agents following a couple mafia members that have some sort of package.  During the chase they shoot down a pilot Cliff Secord (Billy Campbell), and at the end of the chase one of the mafia guys stores the package in Secord’s hanger in his mechanic Peabody’s (Alan Arkin) old World War I duffle bag.  The feds catch the mobster, but miss the package.  Secord of course finds it and it turns out to be a rocket pack created by Howard Hughes, and Secord uses it to become the Rocketeer, and defeat the Nazis.

The plot is simple and fun, and it is easy to tell Johnston was trying to relive the simple fun of the old serial shorts like Flash Gordon.  The good guys are good, and the bad guys are bad, and everyone is super patriotic.

The actors look like they are having fun especially Timothy Dalton playing the villainous actor Neville Sinclair, he channels Errol Flynn quite well.  The film also features Jennifer Connelly as Secord’s actor girlfriend Jenny Blake, and any movie she is in is a plus for me (sorry Lindsey).

The special effects were great for 1991, and even thought they show a little age now, they mostly hold up and do not distract from the campy fun of the film, and Joe Johnston’s steady hand as a director keeps this film focused, light hearted and fun which a lot of comic book movies of today have forgotten.

I loved this film growing up, because it filled me with a sense of awe and wonder, and it is easy to see why my friends adore it.  If you are looking for a little good hearted fun and action look no further then The Rocketeer!

2 Replies to “Its The Rocketeer!”