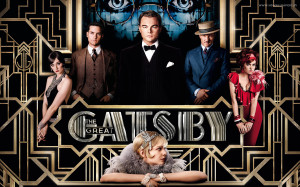 The Great Gatsby is a 2013 film released by Warner Brothers Pictures, and directed by Baz Luhrmann.  It was a major hit for the studio, and it was Luhrmann’s most successful film to date.  There is no doubt after watching this movie that Luhrmann has a gift for visual flare, but he may need to work on his dramatic direction a bit more.

If you have somehow missed the classic 1925 novel’s plot that this film is based on, I will bring you up to speed.  The film follows Nick Carraway (Tobey Maguire) after he moves in next door to Jay Gatsby (Leonardo DiCaprio).  A man known for throwing the greatest parties in all of New York City.  Gatsby has a thing for Carraway’s cousin Daisy (Carey Mulligan) who is married to an unfaithful jerk Tom Buchanan (Joel Edgerton).  They all drink and party a lot, and no one is happy.

The movie still has its moments because of the amazing spectacle that is the first half of this film.  Luhrmann brings 1920’s New York to life in glorious fashion.  Crazy parties, fast cars, great fashion, and then he mixes it all together with a hip and current sound track.  When all of this is going on it reminds us that film is a visual art, and that there is nothing wrong with a grand visual feast.  Sadly the second half of the film abandons all that and deals with the drama of the story.

This leaves the very talented cast, who were playing larger than life characters to match the pomp and circumstance of the first part of the film, out to dry.  Since now they have to try and shift gears and try to act in a character drama.  It doesn’t jive, and the editors should have taken a hatchet to most of it.

If you like the 1920’s, or crazy visual effects this movie is still worth watching.  It just looks cool.  It is a shame that it comes to such screeching halt in the second half.