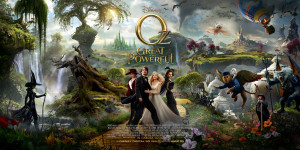 Oz: The Great and Powerful is the prequel to The Wizard Oz, and is directed by Sam Raimi.  It never lives up to the original film, but he still made a pretty decent movie, and if you have seen Raimi’s earlier work then you might notice that this seems a lot like Army of Darkness for kids.

Army of Darkness features a jerk that comes from the future and he saves a kingdom with his knowledge of basic science. Oz: The Great and Powerful features a conman/magician, Oz (James Franco), that goes over the rainbow in a balloon and saves a kingdom with his knowledge of science and theatricality.  He even has some scenes at the end of the film to confirm that he knows they similar too, but unlike his previous movie, Oz learns his lessons and becomes a better man.

You can tell Raimi is having fun with the visuals in this movie.  Since it is a fantasy land he goes over the top with color and the detail, and it looks fantastic.  He also gets to use his horror chops because the flying baboons are quit scary, and he has a few startling scares too.  He also peppers things from the original Oz all over the place so you know it is the same land.

The actors, especially the witches, Mila Kunis (Theodora), Rachel Wiesz (Evanora), and Michelle Williams (Glinda), do a great job, and they are really the stars of this movie, but if you are not a fan of James Franco, then this movie will not change your mind because he is pretty much James Franco.  Oz’s computer animated compatriots, played by Joey King (China Girl) and Zach Braff (Flying Monkey), do a great job of playing the characters sweet and keeping Oz on the straight and narrow.

Raimi did what he could to make a worthy prequel to the classic film, but he falls a little short.  It is still an entertaining film, and since he kept it PG, you can take your whole family, which is a rarity these days.  It does make me want to watch Army of Darkness again though.

One Reply to “Is Oz Great and Powerful?”