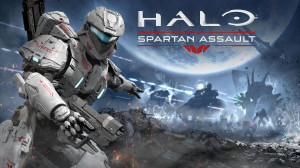 I reviewed Halo Spartan Assault for Windows Phone 8 earlier this year, but now it is out on Xbox One, and I thought I would give my updated impressions.

This is still the same game that was released for Windows Phone except that they have updated the graphics, and added a co-op mode.  That being said, it is way more fun on the Xbox One mostly due being able to use a controller.  I suppose if you bought this game for Windows 8, and then plugged in an Xbox 360 controller nothing would be different, but not having to try and mimic the motions of a dual stick shooter while your fingers cover the screen is just much better.  Plus this game gives the feedback triggers on the Xbox One a workout.  They are rumbling all over the place, and it is a cool feeling.

They must have developed a high resolution texture pack because the scenery looks much better on the Xbox One versus the phone, but the same love did not make it to the character models.  They look a little low-rez, but since there is so much happening on the screen it is a just minor annoyance.

Another minor annoyance is the length of the missions.  A three minute level is perfect for a mobile device, but on a console it seems like I am barely getting in to the action, and then it is over.  Luckily since the Xbox One has more than enough power to run this game there is almost no loading, so I am never out of the action too long.

If you are looking for a little Halo to go with your Xbox One, Halo Spartan Assault will fit the bill for now since this is as little as Halo gets.  If you have bought this game for Windows 8 or Windows Phone 8 it is only $4.99, and it is totally worth it at that price, but if this your first time paying for it, it jumps up to $14.99.  At that price I think it is still worth your hard earned cash, but I could understand waiting for it to go on sale.  It is much more fun on the Xbox One due to the better controller, and it shows why consoles are just a better place to play games.