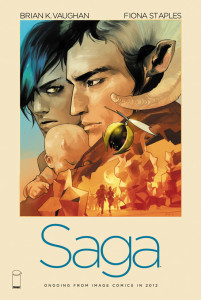 Saga is a comic book written by Brian K. Vaughan and illustrated by Fiona Staples.  It is published monthly by Image Comics, but I read the first trade paper back.  It is a mix of fantasy and space opera much like Star Wars, but it still finds its own voice.

The story follows Alana and Marko as they try and protect there daughter Hazel from a war torn galaxy.  Their parents are from both sides of the war, Alana from the techy planet of Landfall, and Marko from the magic using society of Landfall’s moon Wreath.

The story obviously steals from more then a couple familiar classic stories, but there is nothing else like it that I have read, and Staples’ artwork is top notch.  Vaughan mixes up the action and character building quit nicely too, so it is not boring, but you also get to know and like the people you are reading about.

The only real downside to this series is that is defiantly for an adult reader.  Much like HBO, I think they felt they needed make it a little edgier, but that being said it is still a lot of fun, and it is another winner for Image Comics.