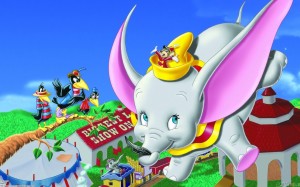 Dumbo, as I am sure you all know, is an animated film from Disney.  It is also one of Disney’s more controversial films, as many consider it to be racist.

The plot is simple, due to an unfortunate accident involving a young boy making fun of Dumbo’s large ears, and his mother defending him so she gets locked up.  His friend, a mouse, helps Dumbo out, and with the help of a few crows, teaches him to fly.

It is simple and it works, and the animation is great, but some people like to point to the faceless roustabouts and the crows as racist, but I think they are missing the bigger picture.  As to why the roustabouts are faceless, I think Disney was trying to point out all the work they do, but no one knows who they are or all the hard work they put in, plus all other African Americans in the film have faces.  The crows on the other hand seem harder to defend with their getups an mannerisms, but they also prove to be caring and smart, by crying when they realize their jokes have gone to far, and using psychology to get Dumbo to fly with the magic feather.

This movie is one Disney’s classics, and to have it streaming on Netflix is great.  If you haven’t seen it, you should.  Disney maybe should have been a little more careful with caricatures of the crows, but they prove to be heroes in this film.  It is good to see an elephant fly.