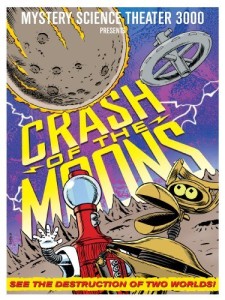 Something wonderful has happened! MST3K after being dropped off Netflix streaming, is now on Amazon Prime!  And there are some episodes that I haven’t seen before, so I watched Crash of the Moons.  It is the sequel to the great Manhunt in Space, but is it just as funny?  Yes it is.

The plot is that Rocky Jones has to evacuate two moons before they crash, but some of the people take some convincing, and as an added bonus there is a General Hospital short before the flick which is pretty awesome.  But plot is not what MST3K is about, it is whether the movie is bad enough to make fun of, but still watchable enough not to get bored, and much like Manhunt in Space, this is one of their better episodes.

The Robots and Joel are in rare form in this movie, almost never letting up with the jokes, and most of them land.  And the fact the John Banner is in it, of Hogen’s Heroes fame, gives them tons of extra material.

MST3K is as always a fun diversion and having them on a streaming service again is great, and Crash of the Moons is a excellent way to spend 90 minutes.

2 Replies to “Can MST3K survive the Crash of the Moons?”