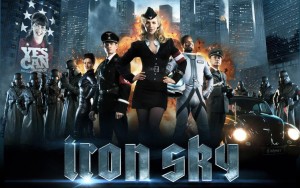 Iron Sky is a European film about Nazis invading earth from the Moon.  I could tell you who it is made by and who it stars, but that would be a waste of everyone’s time, but it does have a creepy German (Udo Kier) guy you may recognize.

The premise is that there are a group of Germans on the Moon waiting for the right time and technology to invade earth and finally win WWII.  They get the technology from an unwitting American astronaut.  That is pretty much it, and if that sounded good to you then it is a lot of fun.  If not I am guessing you haven’t read this far anyway.

I could go on about directing and if the actors are good, and they all do a pretty good job, but this is really just a camp Action Sci-Fi movie to have a few laughs and be amazed by the absurdity of it all.  If you are looking for the film equivalent of empty sugary calories then this is the movie for you.

Until next time, and watch the skies for Nazis!