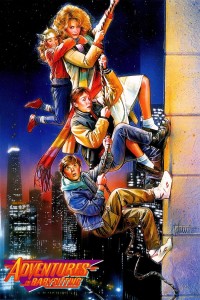 Every now and then I get a hankering to watch old 80’s movies, so I decided to watch Adventures in Babysitting from 1987, and it also happens to be the directorial debut of Chris Columbus who has gone on to be one of the more successful directors of our time directing, Home Alone, a few Harry Potters, The Help, and many more.  Was his first film a success as well?

The story begins as Chris (Elizabeth Shue) is stood up on her one year anniversary by her long time boyfriend Mike (Bradley Whitford).  This frees her up to babysit the Andersons’ kids.  While there her friend calls from the city bus depot, where she has run away too, and begs to be picked up because of all the strange people there.  So she and the kids run off to Chicago and promptly get a flat tire, and then series of unfortunate events befall them.

Everything about this movie screams the 80’s: the hair, the clothes, the actors, and story line.  This movie seemed like Chris Columbus was trying to smash John Hughes and Steven Spielberg together to make a children’s adventure that also had witty interpersonal dialog.  It never quit worked as well those directors’ movies but it is still fun, and Columbus’ talent shines through.

I think I remember this movie being better then it was, but it was still fun, and it makes me kind of sad that they don’t make these kinds of adventure movies for kids as much anymore.  The last one I can remember is Super 8.  Maybe with the success of that film it will inspire more film makers to take a shot at the genre, but until that happens at least we can pop in movies like Adventures in Babysitting and remember the glory days.