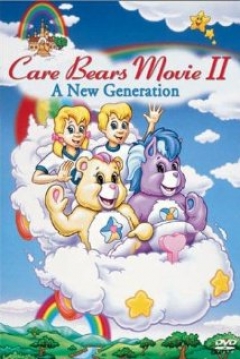 You would have thought I would have learned my lesson about watching 80’s cartoon movies based purely on nostalgia with the She-Ra/He-Man Christmas Special, but no, when my wife and I were looking for a movie for Lil’ Shmee to watch we saw that the Care Bears Movie II: A New Generation was free On Demand and thought, “This will be fun!”.  It was not fun.  It was an hour’s worth of visual punishment.  Nothing about this ‘film’ made any sense, and it was some of the worst animation I have ever seen.

The ‘movie’ tells the origins of the titular Care Bears and their Care Bear Cousins while introducing the two founding Care Bears: True Heart Bear and Noble Heart Horse.  Meanwhile Dark Heart (pretty much Satan) is terrorizing the world’s longest and least supervised summer camp.  I can only guess that the camp counselors all died of boredom.  I mean the Care Bears and their Cousins grow up while these poor kids are still at camp.  Anyway, the Care Bears need to stop Dark Heart from making this camp exciting or something otherwise the world will fall under his influence.

I think my description of Care Bears Movie II: A New Generation makes it sound much more coherent than it is.  This ‘movie’ couldn’t follow a plotline if you held a gun to its figurative head.  Now I know this ‘film’ was pure advertising for two new Care Bears and Baby Care Bears, but it is bad when a He-Man Christmas movie has more artistic merit.  If I was the director and I read the ‘script’ I think I would have told to the writer, “Hey, I think you can do better!”  I mean, I know the ‘movie’ had a writer, I looked him up on its Wikipedia page.

I guess what I am saying is, if you have fond memories of Care Bears related media, your probably shouldn’t re-watch any of it.  It makes the stuff the kids watch today look like Shakespeare.  If the Care Bears Movie II: A New Generation is anything to go off of the 80’s were a cartoon sinkhole that should be filled in.  This ‘movie’ should not be watched under any circumstances.