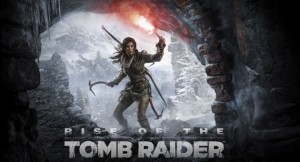 Hello, everybody! I’m BlackRaven, also known as Shmee’s younger brother, and I’ll be giving some of my impressions on Crystal Dynamics’ latest entry in the Tomb Raider franchise. If you are into video games, and haven’t been living under a rock for a while then you probably know that last Tuesday a couple of games released. One of them being a little thing called Fallout 4, I’m not sure if you’ve heard of it, and the other being Rise of the Tomb Raider. Since Shmee decided to go the Fallout 4 route, I thought it would be good if I gave my current impressions of latest Tomb Raider game. Currently I am about half way through it.

Back in 2013, Crystal Dynamics (the current developers of the Tomb Raider franchise), decided to reboot the aging franchise and update it with some modern sensibilities and gameplay. Despite being reviewed well critically and selling reasonably well, it didn’t quite meet the game publisher’s, Square Enix, incredibly high sales expectations. The future of a direct sequel was a little shaky, but, luckily with the help of some Microsoft dollars, it has come to fruition. This personally made me pretty happy, because if you ask anyone who knows me well they’ll tell you I can’t shut up about the last Tomb Raider game. Even though I think some of them wished I would.

If you have played the 2013 Tomb Raider then you will pretty much know what to expect going into this game. Rise of the Tomb Raider is very much like the previous game, but better. The biggest changes between this game and the last one are the environments.  The entirety of the last game took place on a dreary wind swept island in the pacific full of brown landscapes and ramshackle huts, and while that game had some eye pleasing vistas and “whoa” moments the environments started to feel a little drab as the game progressed. This game certainly addresses a lot of those complaints because the locales are much more varied in design and feel this time around, and they look gorgeous. At almost every new area I came to, I couldn’t help myself but just stop and take in the scenery. Gameplay also runs at a nice crisp native 1080p, which goes a long way to helping the game look as good as it does. I think it might actually be the best looking game currently out on Xbox One right now. Unlike the last game, there are also actual tombs to explore. Sure, the previous game had challenge tombs, optional one off areas to explore with an interesting physics puzzle, they generally were just caves filled with some ramshackle contraptions the island natives had put together. Challenge tombs are back this time, but so far they’ve each been actual tombs to raid. Not just relegated to optional tombs though, the main story line will often throw you into gorgeous ancient ruins from civilizations long past that are particularly fun to platform your way through..

As you traverse your way through Siberia, where most of the game takes place, you’ll come across large hub worlds. Game spaces full of animals to hunt, ruins and caves to explore, and loot to grab. They do a good job of making these new areas fun to run, jump, and platform your way around. More often or not, they’ll tease you by showing you something up on a ledge or platform that you just can’t quite reach which forces you to explore the environment to try and figure out the puzzle of how to get up there. Sometimes you’ll be rewarded with a cool collectable relic, or, if you’re lucky, the entrance to a new challenge tomb or treasure filled crypt. You’ll even find certain pathways or doors you can’t even access the first time you pass by. This game and the 2013 reboot both fall in the  metriodvania style of game design. Like Metroid or Castlevania, as you progress you will unlock new gear and gadgets that let you go back to previously explored areas and open up new sections of the world that you could not previously access. They really nailed the feeling of exploration in this game without ever making it feel tedious. The hub worlds are dense but never too large, and it also helps that you can fast travel to any of the previous hub locations at any time. However, if exploring old areas and finding secrets isn’t your thing, the main storyline never strictly forces you to go back to a previous hub, at least, so far in my play through.

In a new addition to the series these new spaces also have quest givers that task you with finding or killing something and reward you with cool new outfits that provide unique bonuses. Occasionally, you’ll also sometimes run across a merchant that will let you trade gold collectable coins for special weapons or gadgets. Unfortunately, the quests are not particularly exciting, and the dialogue is never much more than, “Hey, could you go do this thing for me?” The outfits are cool looking however, so more often than not you’ll still find me doing them anyway. Luckily they have been pretty easy and quick to accomplish, so I haven’t minded much, but I wish there was a little more to them to make them more interesting.

Another complaint the 2013 reboot had was that the story was a little weak. Lara’s transformation as a character was interesting, but all the other characters involved were pretty flat. This go around, the story is much more engaging. It’s still your standard Indiana Jones type fare, involving an evil ancient organization, called Trinity, that is chasing a mystical artifact of untold power, but it is presented pretty well at least and the main villains actually have quite a bit of depth. I’m usually not one for collecting and listening to audio logs and journals, but I often found myself stopping to listen to a lot of the ones I have come across because I found them genuinely interesting, especially the journals of key figures from Trinity’s past. Camilla Luddington also does a great job of portraying Lara Croft. Her voice acting really fits the role well, and I like what Crystal Dynamics is doing with Lara’s character. I appreciate that she’s no longer just a sassy large chested action hero who just spews one liners. She’s much more relatable and real now, and I am looking forward to see where they will take her arc throughout the rest of this game and in future games.

All in all, I’ve really been enjoying my time with the latest Tomb Raider game and I’m excited to keep playing and finish it up before I start the beast that is Fallout 4. So far I highly recommend it. I suppose that could change as I have yet to complete the game, but it has been so excellent so far that I doubt that will change. Rise of the Tomb Raider maintains a lot of the things that made the 2013 Tomb Raider game so fun, but also expands on and tightens up a lot of things that the last game didn’t quite do so well. Particularly in the world environment and storytelling departments. I know that many of you will probably have some tight budgets this holiday season, and other games such as Halo 5, Star Wars Battlefront, and Fallout 4 will probably take priority in your gaming budget. However, you should keep this game in mind the next time you are looking for a new game to play because it is excellent, and I hope they make more of them.