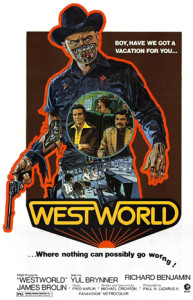 Westworld is a 1973 film written and directed by Michael Crichton.  It is considered a Sci-Fi classic and the precursor to Jurassic Park.  It is the first film to use computer generated imagery, so I decided to give it a watch, and I am glad that I did.

In the future the Delos Corporation has developed life like androids, and they made amusement parks where you can interact with them: Romeworld, Medievalworld, and Westworld.  The movie obviously takes place in the titular Westworld, but it shows flashes of the other lands, and the concept is that you can do whatever your heart desires in Westworld.  Get in a bar fight, have a shoot out, become an outlaw, or anything else western, but since you will be killing and punching robots no one will get hurt.  Sadly for James Brolin and Richard Benjamin they get there just in time for the parks to start acting up, and a visit from android Yul Brynner does not go as planned.

An interesting point the movie mentions, in almost a throwaway sentence, is that they cannot figure out what is wrong with the robots since they were designed by other robots, and in real life that is a point we may get to in our lifetime.  It is slightly scary to think about.

I had never seen a movie directed by the author Michael Crichton before (because it turns out that Westworld is the only one), but he does a good job of framing the action.  He films the fantasy fight scenes and the real ones differently.  The way he focuses in on the humans and lets us see their terror adds great tension to the movie versus the zoomed out ‘fun’ fantasy fights the guests delight in.

The actors, especially Yul Brynner, do great jobs with their roles.  The way Brynner looks so lifelike when delivering his programmed lines, but then the way he turns in to an expressionless killing machine when the time comes is chilling.

This a good movie and it is streaming on Amazon Prime.  It is no wonder they are thinking of remaking it, but I think the original was pretty darn good, and worth the watch.

One Reply to “Visit Westworld!”