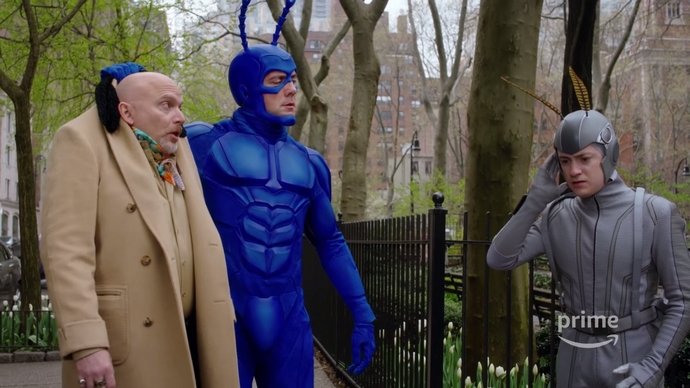 The Tick in its previous TV incarnations were off the wall slapstick fun.  The new Tick however is sad and strange, but in a good way if that makes any sense.  It is still funny, but it is more awkward humor instead of slap stick.  Though sticks are still slapped from time to time.  It is like a direct response to the Netflix Marvel shows.  The Marvel shows are dark and gritty and show heroes in ‘real life’.  The Tick holds up a mirror to that and shows how real life heroes would really work.  It turns out, not well.

Right now you can only watch the first half of season one, so six episodes, and they deal with Author (Griffin Newman) meeting The Tick (Peter Serafinowicz) and accepting his destiny.  The Tick obviously has some things to say about his best friend destiny.  Author is not keen on becoming a superhero due to personal trauma and mental health issues, so he needs quite a bit of convincing.  Right off the bat the show is swimming in different seas story wise.

Peter Serafinowicz’s Tick is perfect.  He is dumb, sincere and unwavering in his quest to rid the city of crime.  Even if he doesn’t know who he is.  His random monologs will no doubt make long time Tick fans very happy.  Author of course is the exact opposite, and Griffin Newman captures Author’s nervous unease perfectly.  The rest of the cast is quite good as well.

The main complaint so far is that there are only six thirty minute episodes to watch, and that they need a bigger budget.  While The Tick has always been more about the comedy than the action, its limited cash flow is very apparent any time anything superhero-y is going on, and that is a shame.  Come on Amazon, give the big dumb blue guy a little more green!

If you love The Tick, you have already watched the two and half hours of new content Amazon has produced, and if you are like you me, you enjoyed yourself.  For everyone else, if you think the Netflix Marvel shows need to get made fun of a little, The Tick is well worth watching.  Even if it is a bit more melancholy than I was expecting.  Another thing to note, if The Tick were a movie it would be rated ‘R’ for language and at times graphic violence, so it is not for the kiddoes.