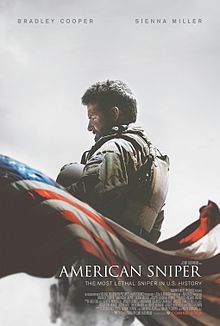 American Sniper, directed by Clint Eastwood, is now the top grossing war movie of all time. This is both extremely fascinating and surprising. American Sniper is a modern tale about a modern war, where most successful war movies are those about the second World War where the enemy is clear, the Americans are the heroes, and a victory is certain. American Sniper doesn’t give us a clear enemy, the Americans are heroic but not infallible, and victory is just surviving to the next day. What makes this movie so powerful is not wrapping the film in a flag and singing “God Bless America”, it’s that it is wrapped in humanity.

Chris Kyle was the most deadly sniper in US Military history with 160 confirmed kills, edging out Marine Sniper Chuck Mahwinney from the Vietnam War who was credited with 103. Bradley Cooper turns in an excellent performance as the bold, yet caring Chris Kyle. We are able to see and feel the weight of Chris’ war with every scene – how it eats at his own soul and on the relationship with his wife. The focus is what’s really the fascinating part about this film; it juxtaposes Chris’s life at war with his life at home where we can see the effects of his four tours and the PTSD he is obviously suffering from. This is highlighted in a fantastic scene at a mechanic’s shop where Chris is confronted by a man he saved and considers him a hero. The scene is long and awkward and you as a viewer share in Chris’ suffering through this hero worship. You feel for the guy because he doesn’t consider himself a hero and yet he very much is.

American Sniper, I think works where other modern war films do not is that it is an honest look at the Iraq war with a protagonist you connect with and can root for. He’s not going back tour after tour because he’s a war junkie like Jeremey Renner’s character in the Hurt Locker and its not preachy like other “war” films. Chris is portrayed as a guy who goes back because he cares about people and returns again and again because he want to make sure others can go home. The final part of the film gives a glimpse to how he uses that heart of service to help himself and others rebuild their shattered lives from PTSD. A heart that sadly costs him his life.

American Sniper is not perfect. The actors are great, the pacing is superb, and the heart of the film is never lost. However the visual effects are not so great. I’m assuming the studio didn’t have much faith in this film because the effects look like a ScyFy channel movie-of-the-week or something from the 90’s. It was just off and in some places distracting. You may have also heard about the fake babies. It is true, the babies are fake and I can’t explain why. Maybe Bradley Cooper doesn’t work with babies? Or maybe it’s Clint? Either way it’s weird.

Still, you should see this movie if you haven’t already. It is a haunting and honest look at war, but also a touching tribute to love and life.