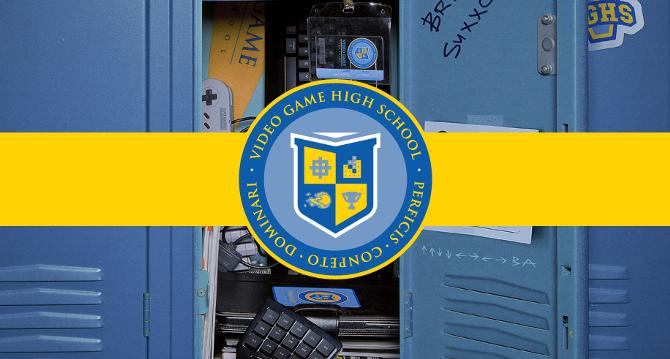 Video Game High School (VGHS) is a series on YouTube made by the guys at Rocket Jump. VGHS was a long form series that brought high production value, professional acting, and well written scripts to a place on the web mostly known for music videos, make-up how-to’s, and cat videos. The third and final season came to a close about a week ago and I thought I’d share my thoughts on it.

A brief intro for VGHS is as follows – VGHS is an exclusive Video Game High School where students learn, master, and play video games as part of the school curriculum. The stars of the school are the First Person Shooter (FPS) team led by The Law, the greatest, most handsomest, man alive. By accident lowly Brian D is able to kill the unkillable The Law and earns a scholarship to VGHS. Here he meets his new best friend Ted Wong, highly intelligent Ki Swan, and the driven Jenny Matrix. Hilarity ensues, many other colorful characters are introduced, and the video game world is brought to life via Rocket Jumps signature style. You should totally check it out.

VGHS Season 3 however just didn’t do it for me at first. The first few episodes reintroduced the problems leftover from the last season – Ted hates Brian, The Law plays for Napalm Energy Drink High School, and Ki is facing Shane Pizza in a battle for Class President. Brian and Jenny’s relationship is progressing and the FPS team is doing pretty well. That all falls apart in the lackluster second episode, which does have a good film noir section, but is otherwise for me a shift in VGHS’s tone. Overall the third season seems too much like a rehash of previous season arcs – I mean we’ve already had the Brian and Jenny breakup because she’s driven to be the best and he’s afraid of losing someone he loves and therefore overreacts. And as I said the tone is a little crasser this time around; not that VGHS wasn’t juvenile to begin with but this time around there was more stuff that took away some of the show’s innocence.

The last half makes up for some of the season’s mistakes and the final episode feels like the epic conclusion the series really needed. I especially liked how it ended the Napalm Mega Mall part of the story. I also liked how the last shot, showed us good friends who were connected through games and then so much more. In this season of gaming, where gamers are bitterly fighting other games, it’s good to be reminded that games can also bring us together and should. If you’ve watched VGHS’s first two seasons be sure to follow up with this one. If you have not enrolled yet, do so and remember – It’s all about the game.

2 Replies to “The Paladin graduates from VGHS”