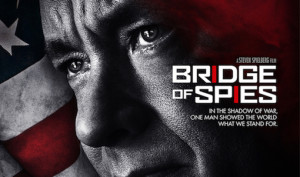 Mrs. The Paladin celebrated another trip around the sun, so I gave her the option to see either MATT DAMON IN SPACE!!!! (The Martian) or Tom Hanks as the diligent every-man (Bridge of Spies). My wife loves Tom Hanks and Steven Spielberg, who directed, so we left our children to see what these two had for us in Bridge of Spies.

The setup is simple. At the height of the Cold War, the FBI has caught a Russian Spy – Rudolf Abel played simply and honestly by Mark Rylance. Tom Hank’s James B. Donovan is an Insurance Lawyer who is asked by his government to defend Able at his trial to show that he is given a fair trial. Donovan defends Able with far more vigor and determination than anyone expected from him, so his patriotism is called into question by just about everyone. However his determination is grounded firmly in seeing the Constitution and the American Way(TM) actually acted out.

Meanwhile Francis Gary Powers (Austin Stowell) is shot down over Soviet Russia in his U2 Spy plane in a very exciting scene. The Russians now have someone they are willing to trade for their own spy locked away in an American jail. Donovan is asked to facilitate the trade, but without official government status. To add an extra wrinkle, a American student is captured by the East German government on suspicion of spying. The US government says Powers is everything, focus on Powers, but Donovan sees a way to get everyone home.

The movie is not a tense thriller with twists and turns at every corner – instead it is a personal drama about how far one man is willing to go, to sacrifice, to see the ideals he believes in lived out. Bridge of Spies shows what happens when a good man does something, risks everything, and sits across the table from their enemy and tells the truth. Spielberg doesn’t use big set pieces with huge crowds; rather small sets, long lingering shots, and one to two people to create a tense drama that is relevant to today’s issues. I’d recommend you see it.