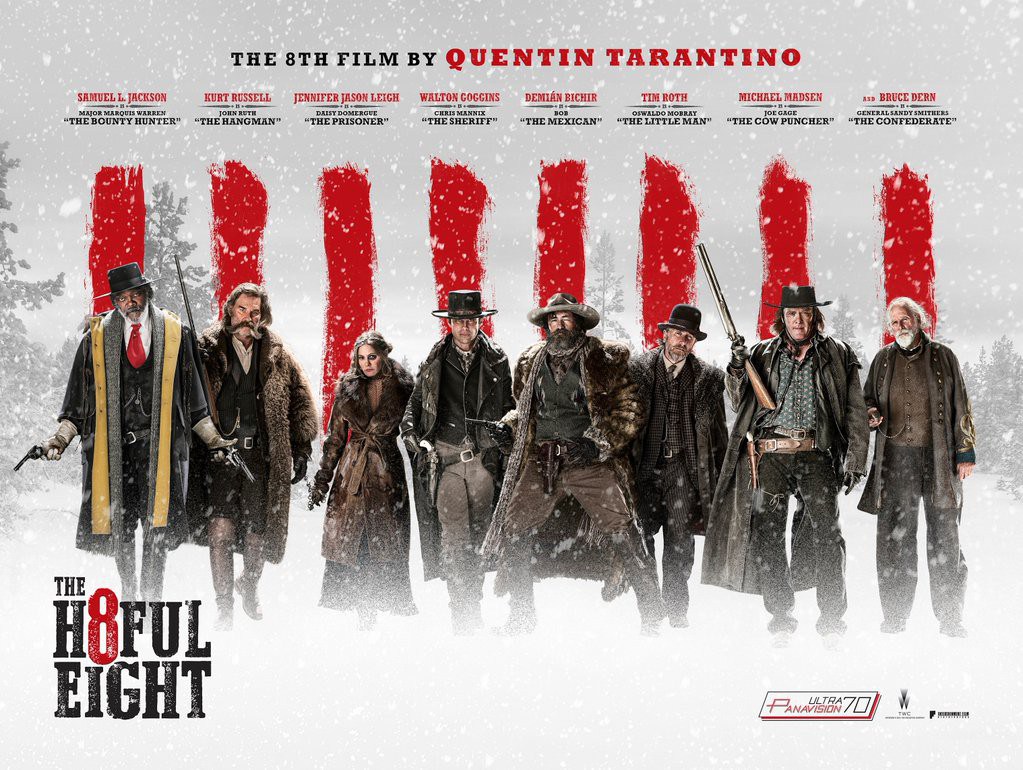 The Hateful Eight was just a too much Quentin Tarantino: It was too long; It was too wordy, and too gory.  It went out of its way to offend to me with Quentin’s signature wink and smile.  I am not saying it was all bad.  As a mater of fact I liked quite a lot of it, but Tarantino needs just needs someone to tell him, “enough”.

The Hateful Eight kicks off with bounty hunter Major Marquis Warren (Samuel L. Jackson) getting a lift out of a blizzard from fellow bounty hunter John ‘The Hangman’ Ruth (Kurt Russell) who is transporting an outlaw (Jennifer Jason Leigh) to Red Rock, Wyoming to hang.  They are forced to wait out the storm in Minnie’s Haberdashery with five other unsavory characters, and all sorts of unpleasantness takes place.

This is a classic Tarantino setup.  You get a great cast of characters in a tight spot and then let them chew on Tarantino’s crazy dialog.  The problem is that this movie is three hours long, and the whole plot is that one or more of these fellas is more of a dirt-bag than he is letting on.  That is a lot of dialog.  So to spice things up Quentin tries to shock you with moments of gratuitous violence or hateful speech.  I am not saying there isn’t a time and place for people using the ‘n’ word, but in the Hateful Eight it is said almost gleefully.  It is clearly being used for effect and not for historical accuracy.

The actors for the most part are all Tarantino alums.  They are all in the Hateful Eight because they know how to deliver Quentin’s lines the way he wants them delivered.  They also are what makes this film at all watchable.  If it was anyone else in this movie, I may have been tempted to walk out.  This cast knows how to not only read the script but let you know that they are in on Tarantino’s long dirty joke.  They say their lines with that perfect half-smile that keeps this film from being overly grim.

Quentin Tarantino is great at making his characters talk around in whimsical little vile circles, but he needs to know when to stop.  At some point the movie needs to stop circling and move forward.  If the Hateful Eight would have been two hours long it probably would have been one of his best films, but as it stands now it ranks among his worst.  Which is still a pretty good pile to be on the bottom of.  If you really like Quentin Tarantino, you will probably find a lot to enjoy with the Hateful Eight.  If not, this is probably not the movie for you.