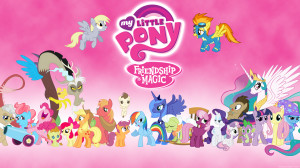 So I go to a lot of events with a lot of nerds, and it may surprise you to find out that dudes that watch ‘My Little Pony: Friendship is Magic’ is a thing.  They are called ‘Bronies’.  At first I was wondering if it was some kind of joke, but it is not.  It turns out there are grown guys and girls that just like to watch the show, and support one of their own: Lauren Faust.  So I decided what the heck it is on Netflix, and it will only take twenty-two minutes of my time to see what all the fuss is about.  I have now watched two seasons of the show.

The show’s basic premise is that a young pony named Twilight Sparkle is great at her studies and magic but has no friends and is lonely.  So her teacher and ruler of the land, Princess Celestia, sends her to Ponyville to make friends. Of course she does, and she and her friends go on adventures and learn life lessons.

Now unlike the Bronies I am not totally enthralled with the show, but it is nice to watch something charming and sweet once in a while, and it is completely inoffensive.  The show is smartly written, and has well formed characters which is amazing for a children’s show.

Most of that is due to the creator of this reboot, Lauren Faust.  Lauren Faust got her start on the shows: The Power Puff Girls, and Foster’s Home for Imaginary Friends, and she is married to Craig McCracken who created both of the previous shows and Dexter’s Laboratory.  These are all shows that geeks like myself have come to know and love, so some of us watching a cartoon about ponies due to their involvement seems less far fetched, and add in that the show is good and you get success.

Now I am not saying that everyone should run out and watch this show, but if you are looking for something fun and will make you smile it might be worth a shot.  You could do a lot worse.  Unless you are allergic to pink because this show would probably kill you.