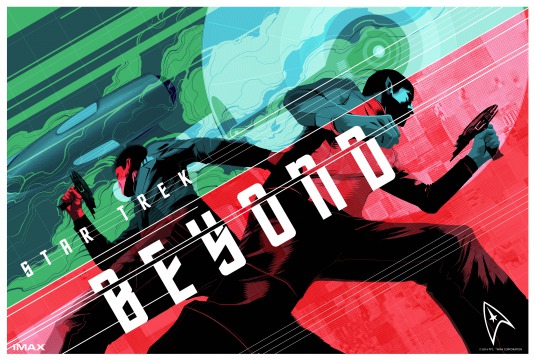 I think fans of Star Trek can start to breath a little easier, Star Trek Beyond is very much a Star Trek movie, and a good one at that.  It has its problems, but it feels like the people at Paramount and the producing team at Bad Robot took fans complaints to heart.  Without the action that was injected in to this movie it could have been an episode of the titular series.

Things have gotten a little slow for Captain Kirk (Chris Pine) and his crew.  They have been in deep space three years and the routine is starting to get to them.  They are starting to wonder if life aboard a ship is right for them.  In the middle of these personal quandaries they will come up against one of the toughest fights they have ever had to deal with in Krall (Idris Elba) a Federation hating alien bent on its destruction.

While Idris plays Krall menacingly enough, Krall is the worst part of this picture.  You never really understand why he wants to destroy the Federation that much.  They kind of explain it, and they have some ideological differences, but mostly he is just a threat that Kirk and Co have to deal with, and he does pose quite the threat.

The cast, as always, is the best part of this film.  They work so well in there respective roles, and I like that Star Trek Beyond split them in to smaller groups to let them play off of each other a little more.  The Star Trek series was known for this, so it was nice of Star Trek Beyond to return to that.  After three movies it is good to get a little character building.

Star Trek Beyond is not perfect, but it was a good course correction after Star Trek Into Darkness.  The nods and throwbacks in this movie were fun and well used instead of unearned and movie breaking.  In other words Star Trek Beyond is the kind of movie that fans have been wanting, and I hope that future movies follow its lead.